Trouble in pizzadise! Someone dares say that Motorino isn't the GREATEST PIZZA KNOWN TO MANKIND!!! 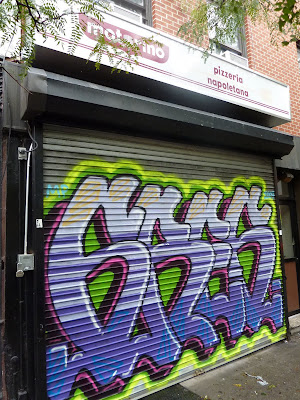 Well, the nerve! So our new friends over at Launch Stalker decided to check out the much-hyped Motorino after reading the rave reviews in The New York Times. The paper's reviewer stated: "It serves the city’s best pizza." There are locations in Williamsburg and on 12th Street near First Avenue hereabouts.'

An excerpt from Stephen Kosloff's take at Launch Stalker:

The verdict: Motorino is good pizza, but it’s not the best pizza in the city.

Last night I ordered the broccoli and sausage pizza, and it was really salty. I know pizza is inherently salty, but this was an exceptionally salty pizza.

Then there is the crust, which had the exact texture and taste of Indian naan. It tasted fine, but for me the ideal crust is crispy.

Then there is the definition of “pizza,” which for me, because I come from a long line of trash-haulers and fish-mongers, means “slice.”

Sorry to all my haute pizza peeps, but if I’m at a table using a fork and knife, I’d rather be eating steak au poivre. Especially if my entree is over $12.

Email ThisBlogThis!Share to TwitterShare to FacebookShare to Pinterest
Labels: pizza

Yeah, if you like or want to try Naples style pizza it's pretty good. Not the "city's best pizza" or anything like that but it's good and not as pricey as some of these other new whole pie places.

Should you bother? Depends on if you want to sell arterial fluid or mortgage your firstborn for what is essentially Italian street food. It's not bad, but you can cut the pretension in the place with a knife. There's better - hell, Luzzo's right around the corner does a better pie for my money - so unless you are thrashing around in your bed at 3 AM unable to sleep because you are desperately yearning for Motorino, you can take a pass and know the world will not stop spinning on its axis.

I like it, and I've never found it to be overly salty. I still like di fara's better (though maybe I fell for the hype and the experience of trekking to midwood and then waiting in line) but I think Motorino is my favorite in the neighborhood. But it depends on the person--I like $2 plain slices as well, but sometimes I'm in the mood for this type of pizza. However, unlike the times article, I've found the crust to turn rock hard overnight in the refrigerator, so I try not to order enough for leftovers.

I'm with Stephen: Slice or nothing. I wouldn't sit down with a knife and fork for a pork bun or a hot dog, either, no matter how good they might be.

It's good, not great. I prefer Luzzo's.

on a non-pizza but in the neighborhood related note -- the smac next door ain't bad either, albeit pricey.

I have eaten homemade pizza in Italy and really nothing compares to it. I agree the crust must be crisp. I am a $1.00 a slice customer at 2 Brothers on St. Marks and am quite satisfied. My memories go back to Brooklyn when the small pizzarias on Flatbush Avenue near Erasmus Hall High School made pizza so hot cheesey and delicious it would blow your mind and it was $.25 a slice.

I think it's great. But for the best, I'd go to John's on Bleecker. Even with a line.

SUGAR in the crust and sauce (waitress there confirmed it like it was a good thing).. may taste good but the headache and sugar blues after are not worth it. Eat a lollipop then go to gruppo or gnocco. :)

I vote for Gruppo.

motorino is not good. even for this style of pizza. i definitely would not get it again. don't bother.