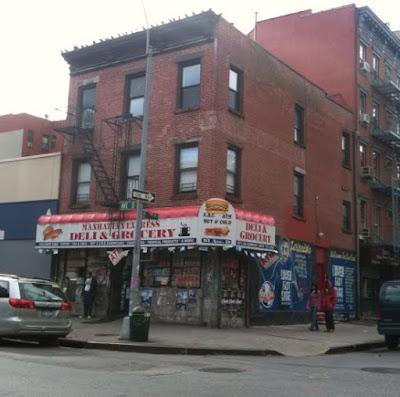 In his Mixed Used column this week in The Villager, Patrick Hedlund reports that 91 Avenue D at the southwest corner of Seventh has sold for $1.32 million (or $443 per square foot!) ...

The buyer purchased the 2,982-square-foot building, which features about 2,400 additional square feet of air rights, as an investment property and plans to construct additional floors, according to Phillip Huang, a senior associate at Massey Knakal.

"I think that those smaller deals are just getting a ton of interest now," he said, adding that the site, located on the fringes of the East Village next to large housing projects, generated about 10 offers in two months on the market.

With properties selling for "under a million and a half, $2 million, you get a lot of people who probably were looking at residential [units] and now they're looking at some cheaper buildings," Huang added.

Looks as if this block will be getting spruced up. The new home of the Lower Eastside Girls Club will be built on Avenue D between Seventh Street and Eighth Street. (This 12-story building -- a new development that will actually give something back to the neighborhood -- will include a community center and 72 apartments.) According to a recent column by Scoopy, the Girls Club will be breaking ground in April.

Previously on EV Grieve:
Will Avenue D finally turn into Avenue C?
Posted by Grieve at 6:55 AM

This block -- a half-block from my apartment, on East 7th -- is scary. I'm sure this will attract all kinds of hoots and hollers; if you like it so much, though: Live there.