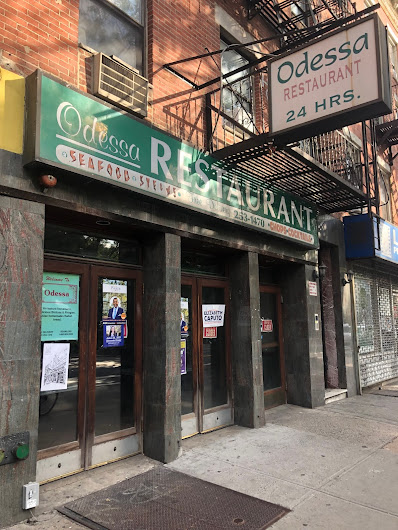 There looks to be a potential new suitor for the currently closed Odessa on Avenue A.
According to Jennifer Gould at the Post this week, Louis Skibar, whose Toloache Restaurant Group revived the classic UWS diner Old John's Luncheonette, which dates to the 1950s, is now eyeing Odessa, 119 Avenue A between Seventh Street and St. Mark's Place.

"The Odessa is next on the list," Skibar told Side Dish. "It reminds me of Old John's. They both had an outpouring of support from the neighborhood when it closed. Diners are part of the city. If we can do something to preserve them — me or someone else — then we should. It's a great thing."

As EVG first reported earlier last month, Odessa was up for sale on Craigslist — a listing that is no longer available, which might mean a deal is already in the works with Skibar, who started his restaurant career 37 years ago making deliveries and cooking at Old John's.
And what might he do with a property like Odessa? Per the Post:

Over at Old John's, Skibar has worked hard to maintain its old world charm while sprucing things up around the edges.

"I think it's unfortunate that so many diners are closing, but a lot are mediocre and maybe that's why. The feeling of nostalgia is there, but diners still have to deliver quality and provide really good food. We are very aware of this," he said.

He's also updated the diner's look. He's kept classic touches like the black-and-white mosaic marble floor, the tin ceiling and the Art Deco lighting. But he gave the outdated entranceway a clean new look, replacing the faded deep red vestibule that once greeted customers with a simple glass door.

You can read more about the new Old John's at Eater and Gothamist. West Side Rag first reported on Old John's return.
In July 2020, longtime manager Dennis Vassilatos said that Odessa, which dates to the 1960s, was shutting down after a prolonged slump in business due to the pandemic.
However, closer to the last day, co-owner Steve Helios told Gothamist that Odessa was only closing temporarily, that the space would be renovated. (The building's landlord is Odessa partner Mike Skulikidis.) Few people bought this story, though.
And for these last 11-plus months, Odessa has sat frozen in disco-fries time, without any noticeable activity inside.
H/T Upper West Sider!
Posted by Grieve at 5:00 AM

Email ThisBlogThis!Share to TwitterShare to FacebookShare to Pinterest
Labels: Odessa, the Odessa

Sadly Old John’s did not survive the pandemic. I miss the classic style diners, remember Astor Riviera? That place had fond memories.

Just open it back up - don't change a thing - keep the menu the same - Long like ODESSA!

@8:11am: It says he revived Old John's, so why are you saying it didn't survive the pandemic?

Old John's closed during the pandemic, but this guy bought it, refurbished and reopened it a week or two ago. I haven't been, so I can't say if he did a good job, but it looks like he at least didn't totally mess it up.

Your he also upgraded the menu (and prices) so not everything stayed the same. An entree is mid to low 20a there .

This will be interesting for restaurants in general. A lot of REBNY wants rents to return to prepandemic levels, but I think a lot of people don’t want to pay a large fee for being inside anymore. This is apparent to me by the amount of people spending their time outdoors in the city now. Why people are packed in the parks, perhaps why a lot of business left but isn’t coming back.

Watch as people bring back diners to the detriment of cost caused by high rent. For high prices your food better be fantastic. Really sell me that I’m eating pancakes in pricey NY. Otherwise I feel people learned to cook during the pandemic and will be hard pressed to pay for your business.

Like I said it will be interesting what happens as people no longer feel they need to save the restaurant businesses.

I'm not so excited about diners with "upgraded menus" ($$$), but I guess I understand the motivation there. It looks like Old John's is not open for breakfast yet, which for me is the real test as far as prices go. It should not be difficult to keep egg dishes reasonably priced.

As far as Odessa is concerned-- if they keep it open 24 hours, don't make it overly precious and they hire Willy back, I would be absolutely ecstatic to pay $20 for an entree. It's better than the space staying empty or turning into something akin to the less desirable newer establishments in the neighborhood. I just really miss Odessa.

I dunno. Somehow Odessa never really did it for me.
i would go on occasion. But I was always a Leshko's man.

Goodstuff Diner on West 14th St was one of the better restaurants to close during the pandemic. Great food and service, and a really nice retro color theme that made you hungry the minute you walked in. If they can do something like that with Odessa, then maybe the East Village isn’t dead after all.

this is fantastic news! people need real food and diners, local businesses-not everything needs to be a fancy fine dining experience that is as overpriced as NYC rent. lately the quality of food is definitely not matching the high prices.

also please open more coffee shops and places where i can ask for a gluten free option without the counter person reacting as if I asked them to donate an organ. Like John's, a neighborhood staple, which has a vegan and gluten free menu. More of this, and different types regional of cuisine instead of yet another weird marshmallow or toast store...

I savor every moment that Orion’s on 2nd Ave exists, it has the right diner feel to it

The Riviera was AMAZING. MEMORIES. But Old John's was great. Really happy about this.
IzF

The Riviera is one of the few places I actually miss. That was sort of the unofficial entry point into the anarchy and decadence of the EV back in the day. Also that diner on the corner of Canal and Broadway always a fun hang.

A lot of the good dinners closed one on 14 held on during the early pandemic closed was one you could get traditional Irish breakfast at I've worked so many dinners and road houses odessas was ok we need a good 24-7 dinner their but I agree it must be reasonable I knew a road house that had a $2.00 chilly bowl thck a spoon stood in it more meat than bean and at 2.00 half was profit and it was good on that alone that road house sold ten gallons a day it's how and what a cheep good food like that's a good draw around hear would go good higher items to for when people have it but a couple draws like that of a bulk made serve out cheep quick meal draws people from all around hope this guy knows that does that

Exactly what we don't need is a "mid-range" "retain much of the old-school vibe but freshened" diner-style elite party barn. The whole purpose of the diner is decent tasty eats, reasonable prices, a place where anyone could and does go and gather--a real community social space which now it won't be any longer. Thanks for nothing.