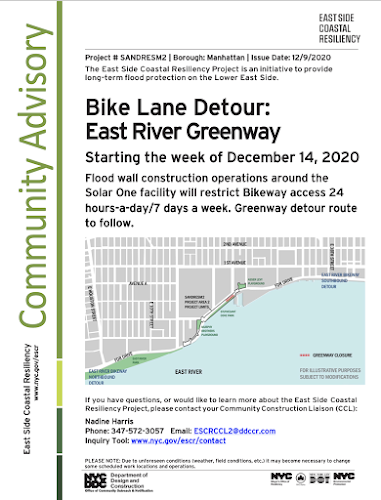 On Monday, the city will begin flood-wall construction at the Solar One facility in Stuyvesant Cove as part of the East Side Coastal Resiliency Project.
This is considered Project Area 2, which encompasses work between 15th Street and 25th Street including Asser Levy Playground, Stuyvesant Cove Park, Murphy Brothers Playground as well as local streets around the Con Edison facility.
Given the work start, the bike lane along this stretch of the East River Greenway — between 20th and 23rd — will close. Despite promises of a two-week notice ahead of any closure, there's no word of a detour route for cyclists, according to residents and community groups.
In addition, there's some confusion about these mystery signs that have appeared in and around different streets with bike lanes ... and the partially covered signs we spotted earlier on 10th Street at Avenue A have disappeared ... while other ones have arrived, such as on First Avenue by Fourth Street (h/t Choresh Wald) ... 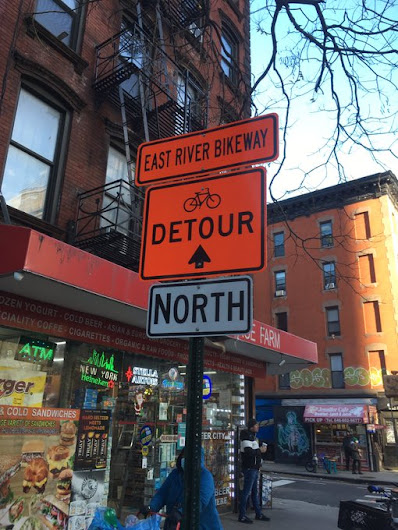 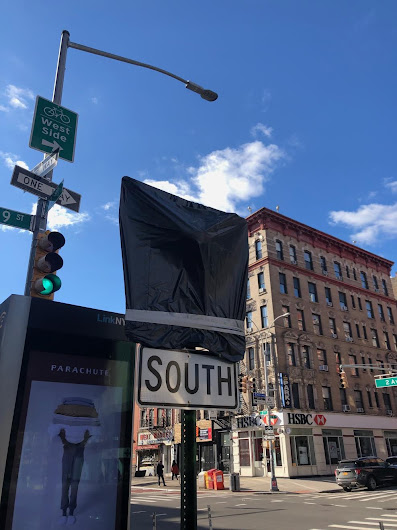 The hotly contested flood-protection plan that will bury/elevate East River Park by eight feet as part of the East Side Coastal Resiliency Project is expected to start in the spring. (This is Project Area 1 between Montgomery Street and 15th Street.)
That work is expected to bring a permanent protected bike lane to East Houston and Avenue C.
On Nov. 24, Community Board 3 endorsed the plan — specifically a 20-block protected bike lane along Avenue C and a protected bike lane on Houston Street from Second Avenue to the East River Greenway.
Here's a look at the current Avenue  C bike lane configuration at East Houston... 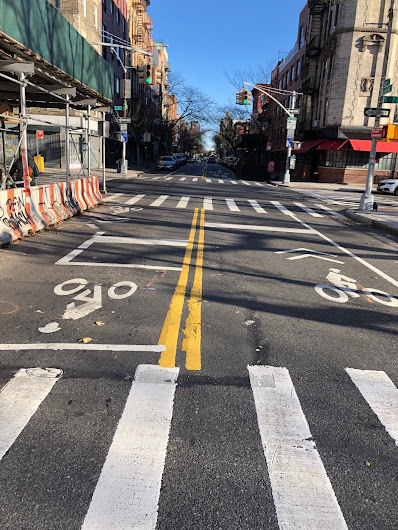 Per Transportation Alternatives: "These bike lanes are essential for New Yorkers getting around the Lower East Side, and these projects are especially critical in light of the East Side Coastal Resiliency Project that begins in the spring and will shut down the East River Park for at least five years."
Posted by Grieve at 6:00 AM

The Avenue C bike lane will be operational only if it is coupled with Commercial Loading zone areas next to it. Otherwise it will become a loading zone itself, just like the 12 and 13 street bike lanes.

Absolutely right. And it's all about enforcement. Private cars, not just commercial ones, are stopping on bike lanes on 12th st in increasing numbers recently. They know there's no enforcement.

Bike lane enforcement against cars/trucks parking in them is non-existent.

@12:43pm: I live on 12th St. and yes, cars stop there b/c there's NO other place for them to stop without impeding all traffic on the street. That's called "reality." Apparently nobody who's ill, infirm, disabled, or who's unloading packages is allowed to exist any more, b/c it takes them too long to get out of a taxi.

The bike lanes on 12th and 13th were badly conceived from the get-go and shoved down our throats as part of a "temporary" fix b/c of the L-train tunnel repair. That was a complete Trojan horse explanation, and we all knew it! Now that the work is done, it's permanently impossible to take a taxi across 14th St.

When you force traffic to squeeze on a residential street, yet somehow life & activity need to continue, then *this* is what ends up happening. It's not a surprise.

And all those darn package deliveries via USPS, UPS, FedEx, Amazon - tell me you never get any!

You are absent right that all these road users need curb access: Delivery, utility vehicles. Residents who need to drop off and pick up. Ubers, taxis. Emergency vehicles of course. All these people have currently zero access to the south curb of 12th Street and the north curb of 13th street because the city designated them as free car storage: people store their private property for free on public space at the expense of everybody else. Alternate Side parking is car storage and needs to be abolished.

@Choresh: I find your obsessive & fixed opinion (that all cars are BAD, and parking a car on the street is BAD, always & forever) to be tiresome.

Further, you are wrong to claim that there is "zero" access to the south side of 12th Street, b/c I see 12th St. from my window and I & all my neighbors access 12th Street regularly from the south side.

As to "private" use of public space, the same can be said of every restaurant that has outdoor dining space taking up one lane of the avenue or street.

People who are purists about the way society "should" be are necessarily extreme and inflexible in their views. In this respect, they don't have concern or consideration for other people's needs, nor for anyone else's opinion. There is no possibility of having a conversation nor an exchange of ideas with you because your mind is closed on this topic. But you should know that your view is *far* from being the prevailing POV.

Get rid of free taxpayer subsidized car storage, i.e. street parking, and there will be lots of room for everyone else!

If car owners went away then the city would be even deeper in debt. Enormous sums of money are collected with tolls, parking fines, gas taxes and soon congestion pricing. MTA is horribly run. That's one of the reasons people own cars. They can't reliably get someone in a reasonable amount of time. If you want to get of "free car storage" then give developers an incentive to build affordable parking garages. And yes, I too am tired or Choresh's fixation on street parking. Get a life.

Nope . 82% of the people who are living in this neighborhood don’t have vehicles so never get to use the space. I never said cars are bad: I advocate for free curb access to utility vehicles, delivery vehicles etc. vehicles that are being used. All the vehicles that are parked right now on the south side of 12th street shouldn’t be there, they need to be stored in a garage. There is zero reason for the city to provide free car storage.

Asinine to build a bike lane at Ave. C. It's all for a few bike activists that they bring these things up. If someone is afraid to ride in the regular bike lane with traffic, they can go to First Ave. There needs to be somewhere for cars to pull over, and park. It's just essential to a city like this. They serve a completely different purpose than bikes. I ride my bike everywhere, but I know it's a completely different tool. When cars/trucks/cabs have nowhere to pull over, they're just going to have to block the street, etc. There has to be a way to make these lanes on just the large aves not small ones like Ave C.

@choresh free "car storage"? It's parking, dude. Cars get used, and need somewhere to go. That's the point of a car. I can't even take that statement seriously.

@choresh what are you talking about? Parking is not storage. When one space opens, someone else can use it. The street spaces are not owned, it's shared. Cars are used for many different things. Stop being obsessive.

It used to be that people used their actual names when they expressed their annoyance with their neighbors. Anyway: it is car storage since most cars are not moves for 5-6 days at a time (or 50 days sometimes). The only people who “share “ the parking spots are the car owners. 80% of the area residents have no cars so don’t get to “share “ the public space.

"80% of people do not own cars" It depends on the building. I'm sure that's true for NYCHA, maybe even a higher percent. In my building 50% or residents own cars. We're an old school 5 story building where most of the people have lived in their apartments for 20-30 years.

Parking is "car storage" what else would it be. Those lanes can be used for many other more efficient and less selfish purposes. Taking up a large amount of public space for you personal use is selfish- sorry. All the canards about the MTA being horrible don't hold water; these cars didn't appear in the last 6 months. I've lived here 40 years, and have never had a car, so it's most certainly possible. Let those lanes be used for something productive.There's nothing "purist" or "obsessive" about wanting public space to be used efficiently and equitably.

And my family has a car. Parking right now is fierce. I do not support converting Ave C into permanent dedicated bicycle lanes. Biggest losers will be the dwindling restaurants on Ave C.

Suggesting car garages is not affordable solution for everyone if and when a spot opens up.

@choresh is making a point to stay that there is utility and value in examining how public space is used for the benefit of the broader community...as well as the dangers of its inappropriate use. Whether you have a car or not is irrelevant, it's about the flow of traffic, vehicle access and pedestrian/cyclist safety. Before you go out and decide to take a stance against, bully, thwart or otherwise mis-quote someone who is ACTUALLY trying to make your life better, I suggest you (the many Anonymous name callers) do a tenth of the work @choresh does to whatever goal you would like to see achieved. You don't have to agree, by all means do your best to forward your own mind and opinion, but please...keep it respectful. People like him and his entourage are doing what they think is right for themselves and their communities, you do what you think is right and then all the good people with all their opinions will be heard.