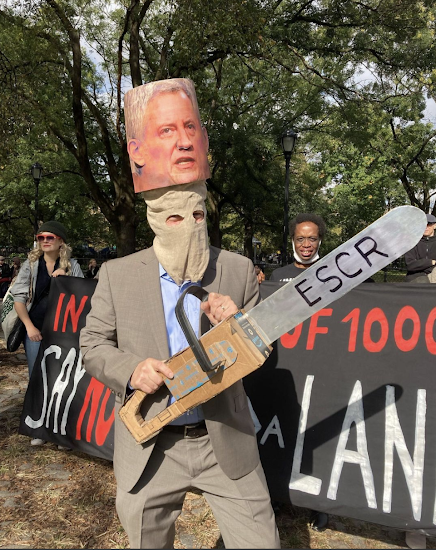 Photo from yesterday's march to East River Park by Jeremiah Moss
As we reported last Monday, "phased work operations" begin today in Project Area 1 between Montgomery Street and 15th St., including East River Park as part of the $1.45-billion East Side Coastal Resiliency (ESCR) project.
So starting today, the Brian Watkins Tennis Center will start to shut down. According to the construction notice, four tennis courts on the north side and the tennis center will remain open through the end of the 2021 permit season on Nov. 21. All tennis courts and the tennis center including restrooms will be closed until 2024 — subject to change, per the city.
According to the latest timeline from the city, leagues will be able to use the ballfields through Nov. 30. Permits for the BBQ areas and amphitheater will no longer be available after Nov. 30.
Starting last week, the former compost area was to be converted into "a passive lawn space." Per the city: "The new passive lawn area will provide public recreation space during ESCR construction. Construction will take place from mid-October through mid-November." 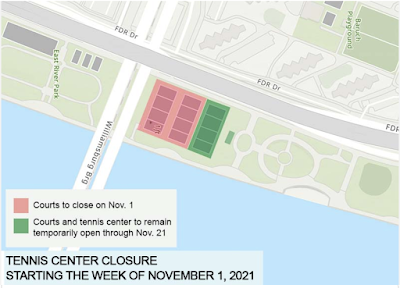 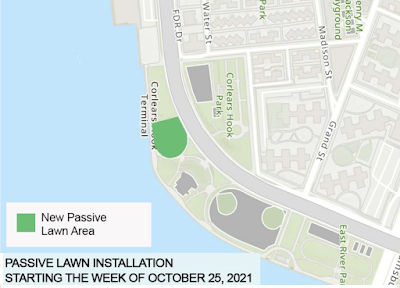 Our previous post has more details on what has been happening to date here ... as well as the opposition to this current plan.
Work continues in Project Area 2 between East 15 Street and 25th Street, including Asser Levy Playground, Stuyvesant Cove Park and Murphy Brothers Playground.
Construction on the East Side is expected to wrap up by the end of 2026.
Updated 10 a.m. 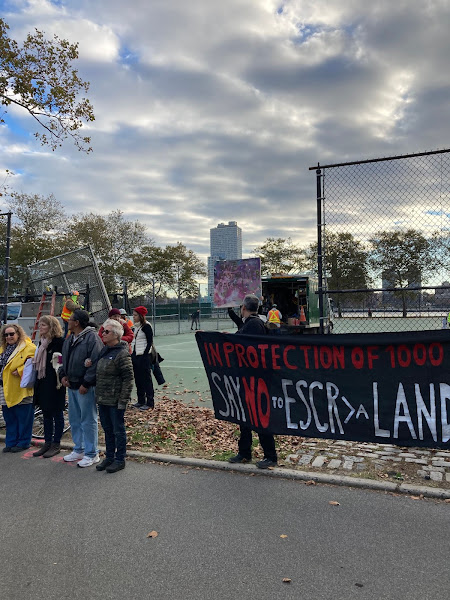 East River Park Action reports that a group of residents are currently at the tennis courts protesting the start of the construction here...
Updated 11:56 a.m.
We're told that the group is blocking construction workers from accessing the site ... and that the NYPD is on hand "threatening arrest."
Updated 2 p.m.
Allie Ryan, an East Village resident who's running for District 2 City Council against Carline Rivera, was among those arrested today...  (photo by @EmilyJCatalyst) 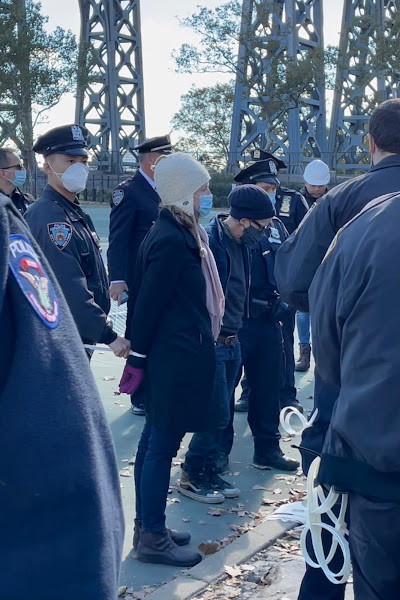 According to one estimate, 50 officers from the NYPD and Parks Enforcement Patrol are on the scene... (photo by @EmilyJCatalyst) ... two activists were said to be arrested in the end... 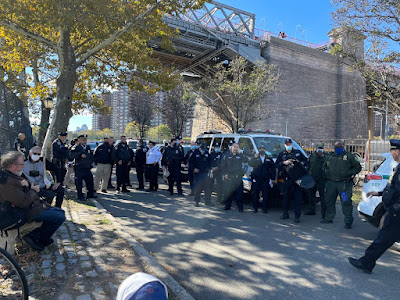 The biggest crime against the people of New York City is about to happen.

F U De Blasio and Carlina.

Don’t forget to vote today if you want to be done with Carlina.

FUCK this. What a disgusting push to make this one of those bullshit "parks" like Domino Park. Doesn't feel natural at all.

Serious question: If they’re ripping everything up, are people allowed to dig up bushes or small tries if they can transplant by their building ?

Everyone needs to accept and face reality. I am tired of fighting this. Nothing we do or say will stop it from happening. I did what I could to protest, contest and march at City Hall and nothing happened. I wrote letters to everyone behind this project and didn't receive one response. Why? Money and power and influence, none of which I have. These people don't care about us. So, we can express our grievances on this blog and to each other, but nothing is going to change the fate of this beautiful soon to be demolished park. It will be gone before we know we know it. Am I devastated? Beyond. But I am very tired and broken. I need to direct my energies on other meaningful causes now. RIP East River Park.

Do anything and everything to postpone the destruction for the next 6 weeks until the current mayor is GONE - isn't there some legal avenue left to get this work stopped for the rest of 2021??

Disgusting. I'm so tired of the corporate, monied Democrats, like our Mayor and Councilperson, who will sell us out for their personal ambitions. I'm going to vote tomorrow for Allie Ryan for Councilperson. Heartening to see a politician who is willing to put themselves on the line personally for climate justice.

I give those people a lot of credit for protesting. But unfortunately this is a case of "I fought the law and the law won".

I voted for Allie Ryan because of this one issue. Unfortunately, she and other 3rd-party candidates are all but invisible in this city. Stop voting D down the line and believing you're doing any good.

Echoing @10:24, I am also moving west, after 20 years in Manhattan. And with relief too. The quality of life is under attack here.

Depends where you are moving. If you have quality of life issues in NYC you in for a rude awakening in SF, LA, Seattle or Portland

President Biden, "we must conserve and restore forests"
https://www.whitehouse.gov/ceq/news-updates/2021/06/24/taking-action-to-conserve-and-restore-the-lands-and-waters-upon-which-we-all-depend/

The city deploys an army for a small protest . . . and can't be assed to consider that renovating/altering/closing a large, complicated, urban park (in a flood zone, a long complex history, and dedicated volunteers) is more complicated than a shopping mall or a super tall apartment building.

Years of not building thoughtful public infrastructure and years of budget cuts and so on have left the city under resourced for large projects. I'm sure it's tempting, even if you aren't on a contractor/developer payroll, to cut corners to simply get projects moving. But this is a huge project and an important piece of flood infrastructure . . . and a painful city-inflicted mistake.

From above Whitehouse.gov site
"so many Americans, especially in low-income communities and communities of color, are without meaningful access to nature. That’s why I am eager to work in partnership with organizations that are already on the ground working to measure and increase access to green space, in order to expand nature’s reach in a just and equitable way for all."

I’ve been in the East Village for 30 years and am looking forward to a neighborhood far better protected from flooding and a much better park. See you all there.

@8:22am: Which decade of this century do you imagine they'll have this finished in? I ask, because it's one of those NYC bureaucratic "full employment for construction workers who stand around doing nothing" deals.

"See you there"? No, you won't, b/c this will take so long that children will be born, grow up & move out, and older people will retire & after decades of retirement they will die - and NONE of them will get to "see" anything but a fake completion date.

I hear you 2:05 pm. It has been hugely disillusioning and exhausting to see how all of the "progressive" democrats I helped vote in actually do not care *at all* about the environment, nature, community, innovative urban design that works *with* nature to mitigate climate change, community-based governing, or the health and well-being of their own constituents. I picked up a rock and learned that the worms of real estate are the real mayors of this city, and right now they only care about quick cash, steel-and-glass towers, concrete, and private property solutions. My one tiny pleasure is that I will never vote for any of the politicians who facilitated this plan--right during Covid, no less, when we need our park the most--not that they care.

The city claims that all the mature trees in East River Park are sick.
Are they?
https://zuzannna.github.io/Healthy-Trees/
"Dead trees have a smaller diameter than alive ones! Hah, but there could be something in there - it could mean, for example, that freshly planted trees which have a small diameter are in highest risk. This makes more sense when we look at the rightmost figure - it turns out that trees labeled in “good” health have also higher diameter."

The city is going to replace the large diameter healthy trees with small ones? Those that are at high risk of dying (according to the above study).

This is part of hypergentrification. A nice space will be available to the Howard Hughes Corp residences. The goal was to get the residents out and replace them with transients.