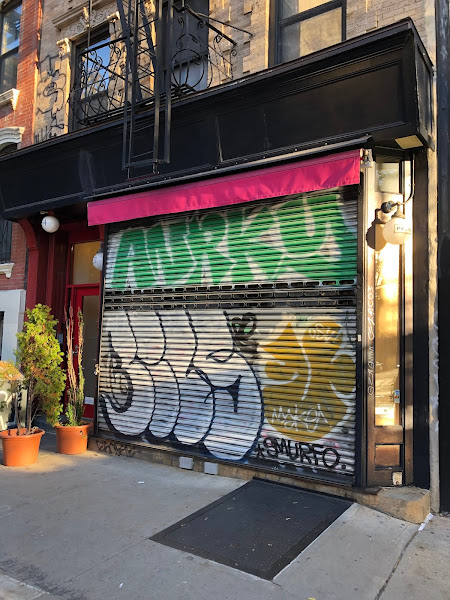 Prune remains closed at 54 E. First St. between First Avenue and Second Avenue — as it has since the NY PAUSE of March 2020.
The website for Gabrielle Hamilton's popular restaurant says to please check back for updates about a reopening.
This was the second straight Thanksgiving now that she didn't cook on the day for Prune patrons.
As she wrote in an essay for the Nov. 21 New York Times Magazine:

I've been cooking Thanksgiving dinner at Prune for two decades, and some families have been coming every year for nearly as long. I've seen some of their little ones who used to show up in diminutive velvet blazers, their legs dangling from the banquette as they sipped Shirley Temples, arrive in later years with full beards and casually order their own I.P.A.s.

The piece, about her Thanksgiving tradition of serving cheese and crackers (a practice that started with a traditional family rendezvous during the holidays at McSorley's), didn't offer any details on Prune's status, other than that it remains closed for now.
Prune fans remain hopeful that the restaurant, which opened in 1999, will return one of these days. Hamilton's compelling essay — "My Restaurant Was My Life for 20 Years. Does the World Need It Anymore?" — in the New York Times Magazine during the worst days of the pandemic in April 2020 raised doubts.
Still, readers who live on this block have reported seeing the longtime East Village resident inside Prune, perhaps doing some catering business. Another knowledgeable source says she signed a new 10-year-lease for the space.
Posted by Grieve at 4:55 AM

Email ThisBlogThis!Share to TwitterShare to FacebookShare to Pinterest
Labels: Prune

Fingers crossed that they did sign a new lease. I have never had anything less than a wonderful meal at Prune, they're dearly missed!