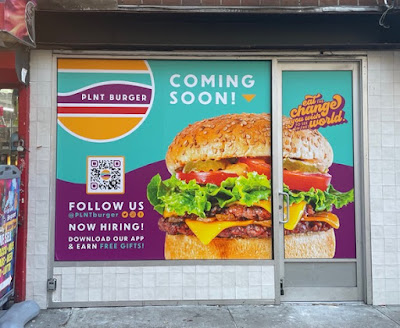 Updated: Open as of 1/24/22
Coming soon signage for PLNT Burger is up now at 139 Fourth Ave. between 13th Street and 14th Street. (Thanks to EVG reader Jeanne Krier for the tip and photo!)
This is the first NYC outpost for the Virginia-based chain that has locations in that state and in Maryland, Pennsylvania and the District of Columbia.
The company is the work of celebrity chef-Food Network star Spike Mendelsohn. He told this to Jennifer Gould at the Post earlier in the fall:

"I'm very excited to be back in New York with a plant-based restaurant, full of advocacy, and doing what is good for the planet," said Mendelsohn, who opened 10 PLNT locations in Pennsylvania and in the D.C. area over the past 18 months.
The Union Square spot will be 850 square feet, focusing on take-out — with four or five seats at the counter. The plan is to open more locations in the city, he added.

I miss the days when the only veggie burger to be had in the EV was that sad, unphotogenic but oddly satisfying soy thing at Dojos—long before "plant-based" burgers sanctimoniously announced themselves as saviors of the planet.

Anything is an improvement over the foul Glaze...

I like the idea of a plant based restaurant but want to see the item prices before giving it a thumbs up. Eating out since the "pandemic" has become rather expensive since restaurants appear to be wanting to make up their loses asap.

Great looking forward to trying it out 👍

It's exciting that we're getting more and more vegetarian options in the neighborhood. It feels like the east village is leading the charge! Humans need to eat less beef, it's good for the planet! Welcome to the neighborhood PLNT!!