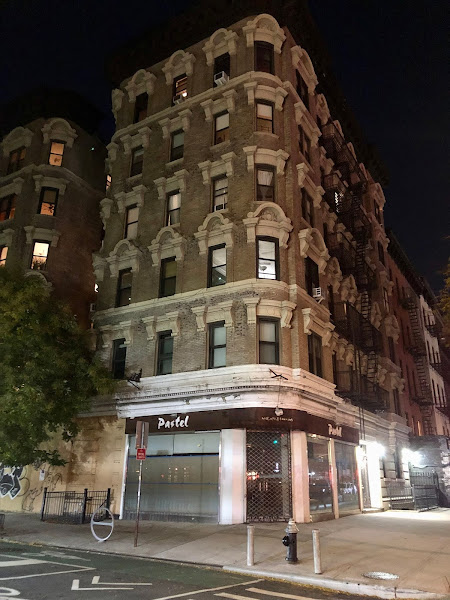 PlantShed, a family-owned floral business that dates to the 1950s, is opening an outpost in the East Village.
According to Booth Capital Advisors, ownership just signed a lease for 193 Second Ave. at the NW corner of 12th Street.
Upon opening next year, you can find flowers, plants and day-long café service. The first PlantShed retail space opened on the Upper West Side in 1981... the café service arrived later. There are now four PlantShed storefronts — two on the UWS, one on Prince Street and one that debuted last year in Englewood, N.J.
No. 193, a high-profile storefront, has been vacant since Pastel Spa & Nails closed in March 2018.
Posted by Grieve at 5:30 AM

Email ThisBlogThis!Share to TwitterShare to FacebookShare to Pinterest
Labels: Plantshed

Wow ! Sounds really nice, hope it works out.
Best of Luck to them.

Plantshed is AMAZING!! Incredible coffee and love walking into such a beautiful spread of plants and flowers. So excited to have them nearby!

OH, NOW THIS IS EXCITING! THERE ARE NO FLORISTS DOWN HERE!

Finally! Businesses have really struggled to stick in that space, so I hope they buck the trend. I think Pastel was the longest-lasting in all the years I've lived on this block. Anyway, I look forward to patronizing them, and I hope they invite some local artist(s) to pain a new mural on that side wall.

My family has been regular customers at the Plant Shed - originally on 96th Street - for years.
But not so enthusiastic about the addition of the cafe business.
Preferred going to a plant store, not a “cool” cafe.
Also as the cafe component has been added, the Plant Shed has built large restaurant street sheds - not OK IMO.

How dare a small business in NYC try to diversify and continue to exist. What an out of touch comment

I remember when this corner used to be a laundromat. Yeah Im an old time east villager.

I used to do laundry there with my mom when I was a kid. In the corner space across the street was a tiny lunch counter where we would get ham and egg sandwiches on Saturday mornings. The Entermedia theater renovated at some point and became a movie theater. The laundromat became a few things including a kosher fine dining restaurant and the nail place. It was idle many times.

And I remember when that lunch counter turned into a fairly decent Thai restaurant for a while, some time in the late 80s / early 90s, I believe, before the whole space vanished during the renovation.

@7:51am: Yep, I also remember that tiny lunch-counter in what is now the movie theater; it was run by a very pleasant Asian couple (or family?), if I remember correctly.

And yes, in the Pastel space, the laundromat was already there when I moved in, about a zillion years ago. That was my laundromat until it closed.

As to PlantShed having an outdoor café, I believe most of us who live on 12th St. would object to having a new post-pandemic outdoor dining shed placed on our already-beleaguered-by-rats residential block. The indoor space at Pastel is enormous (which is part of the reason it took so long to find another tenant) - thus there is NO reason that PlantShed would need a dining shed (as opposed to just having some tables & chairs along their long wall on 12th St.).

Right now, there are no dining sheds on this block of 12th St., but we're still fighting the rat problem every single day in most of the buildings.

They likely won't have a dining structure on the street. There's a bike lane on the 12th Street side and a bus lane on 2nd Avenue. I imagine there will be a few sidewalk tables. They are a florist first, cafe second.

Where does it say that they’re putting up a dining shed?? 🤷🏼‍♂️

Well, wish them luck. Coffee, okay, but plants? Not so much. The plants at their place on Prince are way too expensive. Sunny's Florist at Second Avenue and 6th is my go to. Excellent service, great prices and Sunny and Eddie are true artisans.