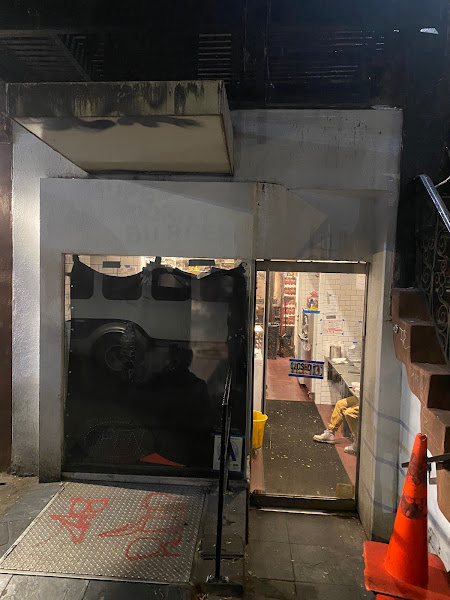 Superiority Burger said farewell yesterday to its original home at 430 E. Ninth St. between Avenue A and First Avenue.... even painting over that hand-painted Superiority Burger signage [with the odd word break and weird kerning, per EVG commenter EV Signage and Font Troll].
In the months ahead, Brooks Headley and Co. will be moving to 119 Avenue A, where Superiority Burger is taking over the Odessa space. They'll have a lot more space for diners as well as a liquor license.
Brooks told EVG correspondent Steven that he hopes to be ready with the new space between Seventh Street and St. Mark's Place in late February-early March. And he plans on holding onto this Ninth Street outpost for the time being.
The popular all-vegetarian quick-serve spot opened in the East Village in June 2015.
Posted by Grieve at 5:09 AM

Your EV Signage Troll is delighted at the shoutout, lives on Avenue A and is a vegan—very excited for this move and expansion!! ❤️🐄

Everyone who actually matters misses Odessa. In response, Superiority Burger will continue to serve its signature burnt broccoli until morale improves.

Odessa was the real deal, a real community asset. Older folks were regulars. When I had the flu I got chicken soup. High end veggie burgers? Sigh…