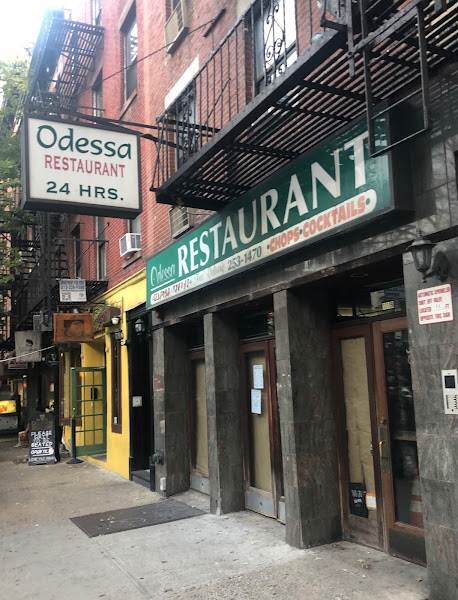 Community Board 3 just released its schedule of meetings for October ... including the SLA & DCA Licensing Committee, taking place on Oct. 18.
Among the items on that agenda — a new liquor license for 119 Avenue A... where Superiority Burger is taking over the Odessa space (which also had a full liquor license here) ... the public notices went on the storefront over the weekend... 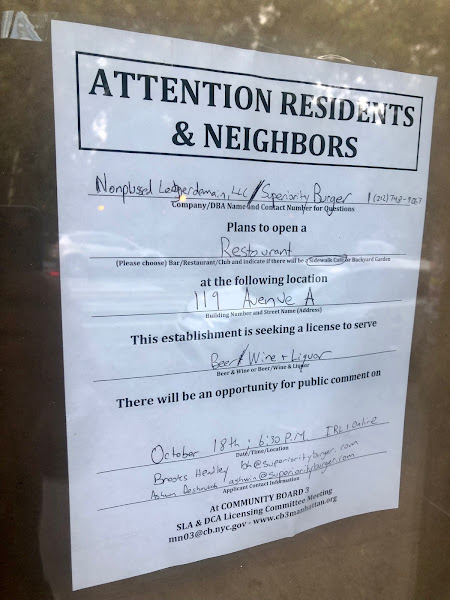 Looks as if they'll be vying for some sidewalk seating as well (sidewalk cafe is circled on the above document). We'll explore this and other applications as they are posted online.
As you may know, Superiority Burger signed a lease for the address here between Seventh Street and St. Mark's Place, first reported by Grub Street in August.
Posted by Grieve at 4:45 AM

Love the LLC name. Thank you SB for taking over Odessa - you are a bastion of this neighborhood.

We used to have tasty reasonably priced food here, in a setting that was very neighborhood. Now we’ll get overpriced “fashion” food…for those who can afford it. Odessa was a real community asset, but no longer.

SB is high quality, low priced food that is healthy. I'm so excited for their big move! They have been an asset to the neighborhood since the day they opened!

The sidewalk seating is a fucking nightmares over there. Liquor license seems OK if they're. not allowed to transfer it. But not really a liquor type of place. This stretch is a mess to walk on ever since the outdoor sheds took over.

I feel for everyone who lives on that stretch. It is insane on weekends especially. I eat Superiority Burgers because they are healthy. I don't need to drink booze with my meal.

RIP to the old authentic East Village. Another nail in its coffin by trendy overpriced restaurants. So sad how the East Village has become one huge obnoxious food court. Superiority Burger exemplifies this unfortunate trend.