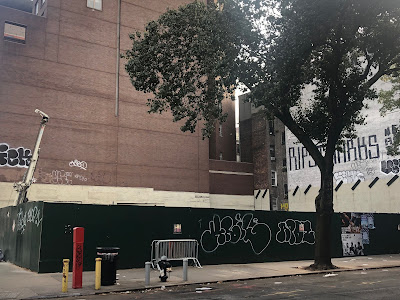 As we reported earlier this month, workers at the development site on the northeast corner of Third Avenue and St. Mark's Place removed the barriers from around the work site... allowing pedestrians to use the sidewalks once again — for the first time since the barricades arrived in June 2020 at this gateway to the East Village... 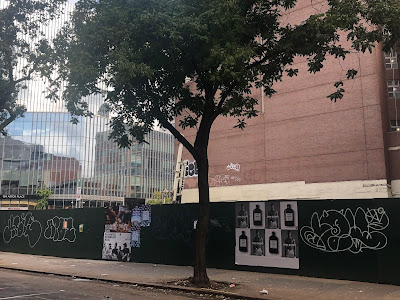 Several weeks later, there's not much going on at the site as work appears to have stopped. (The excavator has moved from one spot to another.) Meanwhile, there aren't any posted work permits on the plywood... 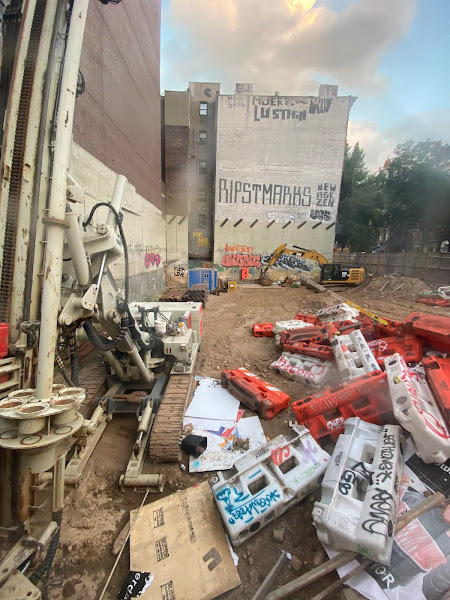 In addition, the rendering for the proposed office building has been discarded inside the pit, where little progress can be detected (soil testing started in March 2020)... 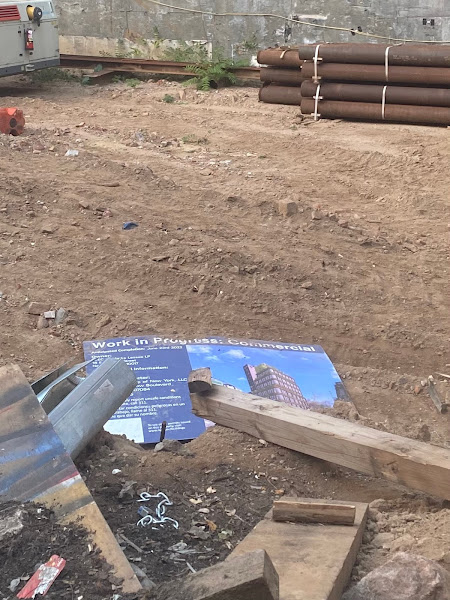 A REEC spokesperson said that they "are working on a recapitalization plan and are optimistic that this will be resolved soon."
It's not known where REEC is with this plan.
According to the Department of Buildings, there's a Stop Work Order "due to contractor withdrawal" dated Sept. 27.
The partially approved work permits dated from May show that the building is now 9 floors — 45,207 square feet in total, with 3,400 square feet designated for a commercial facility.
As you may recall, a 10-story office building had been in the works here.
In October 2020, the City Council's Zoning Subcommittee voted down REEC's application to transfer air rights from the landmarked 4 St. Marks Place to the new building across the street.
With the air-rights transfer, REEC would have been allowed to build 8,386 square feet larger than the current zoning allows here.
REEC picked up the 99-year leasehold for the corner properties for nearly $150 million in November 2017. The previous buildings here, which included retail tenants such as Korilla BBQ, the Continental and McDonald's, were demolished in 2019.
Bottom two photos by Steven
Posted by Grieve at 5:30 AM

These leaches ended multiple businesses and peoples livelihoods, destroyed an iconic entrance to the neighborhood and inconvenienced thousands of people for... nothing? This is what happens when a city favors development over people.

Sounds like the failure of the air rights scam knocked over someone's rickety all leverage real estate play. Now that it's a vacant lot the community should band together and demand another CVS, an ATM or a national dive bar chain franchise. Before construction it could also be seasonally repurposed as a Santacon mud wrestling pit.

You should research the city budget and where the money comes from. Subsidized apartments and endless programs have to be get financing somewhere.

Give it two weeks & it will be a hidden garbage dump as the roaming scum that inhabit the streets in the EV drop their dining detritus everywhere & anywhere.

Kudos to NYC’s Development mania- for destroying historic buildings to leave our neighborhood with an imposing garbage pit as the entrance to St. Marks.