A march to save East River Park today 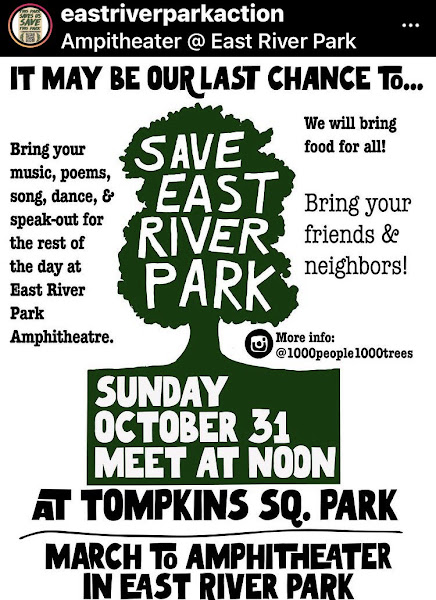 Opponents of the city's current plan to demolish East River Park are gathering today at noon in Tompkins Square Park ... where they will march to the East River Amphitheater.
Via an email from the organizers @1000people1000trees:

We protest big media’s refusal to state the actual facts. ESCR, (East Side Coastal Resiliency Plan) is dangerous. It's not a flood plan. It's a land grab. By tearing down our only park and its 80-year-old trees that mitigate the effects of climate change Lower Manhattan will be LESS SAFE and have LESS RESILIENCY in the future than we do now.

As previously reported, starting tomorrow below Houston Street, all but four tennis courts will close, with the remainder to shutter on Nov. 21 along with most of the southern end of East River Park.
According to the latest timeline from the city, leagues will be able to use the ballfields through Nov. 30. Permits for the BBQ areas and amphitheater will no longer be available after Nov. 30.
Our previous post (link here) has more details and background.
Also today, The Guardian takes a deep dive into the city's plan for East River Park in a story titled "The battle over a vast New York park: is this climate resilience or capitalism?"
Posted by Grieve at 9:00 AM

I wish there were away to have a last minute save and stop this horrible plan from commencing but when all is said and done we are mostly a poor minority neighborhood with little or no fund raising capability and represented by mostly callous and indifferent politicians. The destruction of the East River Park is now a unavoidable travesty.