Report: Police shoot at man threatening people with a knife on Houston and the Bowery 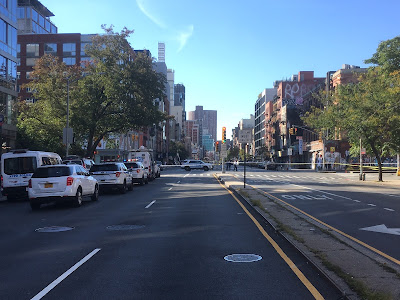 According to published reports, police shot at a man threatening people with knives during the morning rush (8:45) along the Bowery at Houston.
Media accounts described the suspect as an "emotionally disturbed man."
Per PIX11: "According to police, the officer fired one round but missed the man."
The Daily News has more of the narrative:

Starting around 8:40 a.m., the unhinged man cut a bizarre path from outside the Butcher's Daughter, a cafe on Kenmare St., to the Bowery and then to the corner of Elizabeth and Grand Sts., cops said. He allegedly threatened to stab people along the way.

Cops found the man at the corner of Houston St. and Bowery. Officers first shot the man with a Taser, but it didn't work, police said. A cop from the 9th Precinct fired off one shot as officers tried to subdue the man, but no one was hit.

The suspect was taken into custody without further incident.
EVG reader Robert Miner, who shared these photos, reports that the Bowery is closed from Houston to Bleecker ... other parts of Houston are also said to be currently closed to traffic... 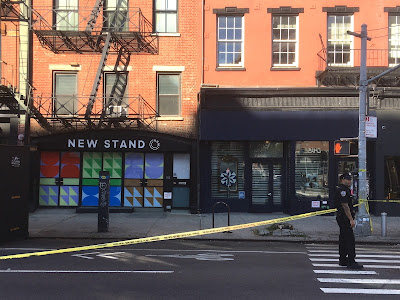 Yikes, I literally crossed Bowery at Prince on my way to the gym at 9am. On my way back I saw police tape everywhere. Gotta stay always alert...

The guy shouldn’t have been threatening people but firing off a gun while wearing all that protective equipment really necessary? This is exactly the poor training the public complains about. I’m glad he missed but that bullet could have also hit someone else. No reason to ever try and be an executioner even though this state would protect the officer if he had killed a clearly not mentally well man. Enjoy your blocked intersection for you to be standing around!

Anonymous 12:22pm--Ridiculous statement; the police were not attempting to be "an executioner" as the man was threatening people with a knife--they used a Taser first but this was ineffective...allowing this man to continue to roam around the streets would have put more people in danger and therefore was likely the reason the police chose to fire at him--the public does not wear "all that protective equipment" and unless you believe that the police wear full body armor head to toe, they are at risk too in these types of situations.

discharging a weapon is a big deal for the NYPD -

12:22 PM: should the officer have allowed the berserk attacker to plunge a knife into the officer's face or hands or other passerbys?

why does there need to be hovering helicopters? the sound is stressful. esp not knowing why the helicopters are hovering.

How about some good old fashioned pepper spray?

You try to pepper spray (effective range 4 feet) a maniac armed with a knife.

The cops *did* subdue the man without their guns. They just fired a gun off first which could have hit someone. They're very poorly trained, which is why they (1) panic and shoot too much, and (2) shoot wildly and hit civilians and each other all the time.

There are lots of ways to subdue manic people (there are "guns" that shoot nets, for example, or they can just kettle and outwait them) but the cops are even more poorly trained with these than with firearms.

You're right Anon, the NYPD should have tried stopping the knife wielding madman with hugs and muffin baskets.

Because we give the police so much money they don’t k ow what to do with it?

Re: DrGecko "They just fired a gun off first"
No, first the police tased him three times, with no effect.

The two points you cite are just simply incorrect.

Because should the attacker break and run, the best way to keep him in sight so the cops can pursue him is with helicopters radioing his location to the cops on the ground.

Who would WANT to be a police officer right now? It's a thankless job on a good day, the pay sucks, and in the age of all things woke, no matter what they do, they're vilified.

If the reports are correct, this person broke into Butcher's Daughter where he possibly obtained his two butcher knives, and traveled through a few neighborhoods scaring enough people with his erratic behaviour and weapons that they called the police.

Anyone can sit from the comfort of their own laptop, second guess a situation they were not privy to in the first person, and say what should and shouldn't have been done.

Couldn’t have said it better myself, Notorious