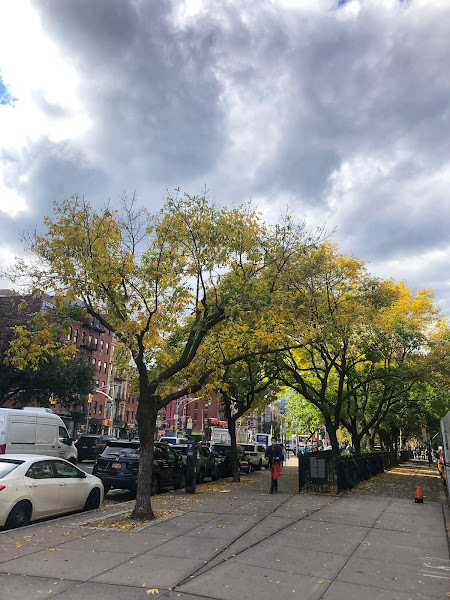 Fall views on 1st Street/Houston
• Early voting begins TODAY (NYC Votes)
• Police say this suspect assaulted an 11-year-old girl in Stuyvesant Square (1010 WINS) UPDATED: A 29-year-old East Village resident is out on bail following his arraignment Saturday on charges of strangulation, harassment, assault and acting in a manner injurious to a child. (amNY ... ABC 7 ... CBS 2) More details at The Daily Mail.
• Arrest made in murder of food-delivery worker on the LES last Saturday (Daily News) Loved ones are collecting money to help victim Miah Sala's family pay for expenses (GoFundMe)
• ICYMI: On 8th and Broadway, cops shove man out of the subway station after he asked them to wear masks (The New York Times) Cops disciplined (ABC 7)
• The latest on the SoHo/NoHo rezoning (Gothamist)
• Remembering the EV boutique/salon Knobkerry and proprietor Sara Penn ... the subject of a new exhibition (The New York Times)
• A review of La Cabra, now open on Second Avenue (Gothamist ... previously on EVG)
• NYU receives a collection of 200 works by downtown artists, including Jean-Michel Basquiat, Robert Mapplethorpe and Keith Haring (Hyperallergic)
• A fall update on Amelia and Christo, the red-tailed hawks of Tompkins Square Park (Laura Goggin Photography)
• About Dumpling Lab on Ninth Street (Time Out ... previously on EVG)
• Gold Medalist Shaun White's condo in the A Building on 13th Street sells (The Post)
• A rerelease for the debut EP from Heart Attack, Jesse Malin's first band (Brooklyn Vegan)
... and our best to Karen McDermott, who owns the toy store the March Hare on Ninth Street with her husband Jason McGroarty. McDermott, 31, found out earlier this month that she has colon cancer. More details here.

Hey Grieve, unless it's just me, there's a dead link in this item you posted:

The link is working OK for me...