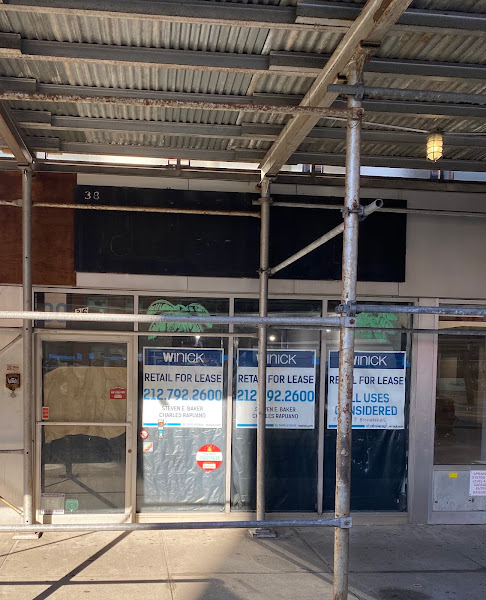 Blank Street, the fast-growing NYC coffee brand founded in the summer of 2020, looks to be opening an outpost at 36 Third Ave. between Ninth Street and 10th Street.
The address just showed up on a Google Map of locations for Blank Street. (Thanks, Upper West Sider, for pointing this out!)
Here's more about the company via a Grub Street profile from August:

Blank Street has managed to underprice the competition. A cappuccino costs $5 at Blue Bottle, $4.15 at Starbucks, and $3.90 at Dunkin' Donuts. At Blank Street, it's $3.50. To achieve this, [founders Vinay Menda and Issam Freiha] have had to fundamentally rethink what customers like them really want from a coffee experience today, and what that might mean for the future of the beverage in New York City.

Perhaps the most intriguing aspect of Blank Street is not just the way that the founders have fastidiously optimized their own operation but also the vision that Menda and Freiha have to update the thousands of coffee carts already doing business on city streets.

The two plan to have 100 locations operational by the end of 2022.
Blank Street takes over space last leased by Frisson Espresso, which closed in September 2019 after 20 months in business.
This seems like goldmine territory for coffee given the proximity to college students (NYU and Cooper Union have dorms nearby). There is also plenty of competition, including the Bean across Third Avenue. Plus, the storefront-obscuring sidewalk bridge surrounding the residential building (The St. Mark at 115 E. Ninth St.) has been up for five-plus years.
Photo yesterday by Steven!
Posted by Grieve at 5:00 AM

The stretch of storefronts of 115 East 9th along third ave has never been very stable, always a turnover of businesses and vacant storefronts

The scaffolding is a deterrent to doing business. I'm guessing it will stay up for years, maybe even as long as the one on 9th Street between 5th and 6th Avenues, which went up in (drum roll) ... 1999. The residents of that building held a sidewalk protest against it last year. Scaffolding owners used to have permit requirements with an expiration date.

I'm shamed that I have lived for 7 decades & never had a "coffee experience". I guess I wasn't raised right.

A good triple espresso should fix that!

I so miss the cheese shop that was in the strip there for a good long time.

I personally love Blank Street. I’m hoping they continue to break the boundaries of what a café could be and should be. It’s a truly hipster cup of coffee. For me it’s about the app and the baristas. It’s a good break from Starbucks this year and huge safety net for the intimidating prices of blue bottles out there. I’m surprises no one’s talking about matto espresso. Everything is 2.50. Cant beat it. Porto-rico importing has the best cold brew, just to turned me off when prices raised. Im a cheapo🫡