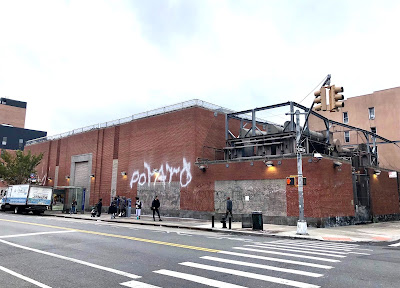 Con Ed deployed another early morning power-washing crew to buff the graffiti-filled substation along Avenue A between Fifth Street and Sixth Street.
This was the second time in less than two weeks in which Con Ed decided to scrub the building, maybe about 80 percent effective as the tags are still visible. (And they missed the POTATO that was sprayed on here over the weekend.)
After the last washing, the graffiti returned within 24 hours... 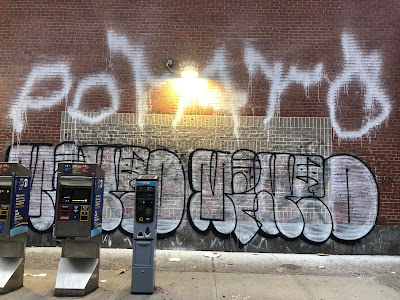 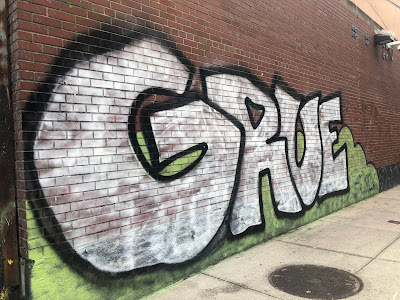 This isn't quite reminiscent of the brown paint wars that dominated local headlines from 2012-2014 at the Verizon building on 13th Street and Second Avenue. Tags would fill up the wall. Someone would cover them with brown paint. The tags would return. So did the brown paint. And so on. Eventually, Verizon just gave up.
Posted by Grieve at 8:03 PM

I don't understand why the cops don't just sit here and periodically bust people. Even if they run off one would think it deters some

What is wrong with people ? They have to let the world know "Potato" ? WTF ?

They are repainting the walls brown on the Verizon building on 13th and 2nd, the people working on it complained about the citibike docking station making their job harder.

Who is responsible to clean the sidewalks outside the Con Ed plant? That block is always dirtier than neighboring blocks.

I'd rather the cops sit and arrest bicyclists rolling through the red lights and trying to hit pedestrians. The paint on the walls doesn't try to kill me 10 times a day.

Put a mural on it.

I really hate when these clowns tag small private homes. It's expensive to remove and people are working hard to keep their houses nice. It's just dumb and mean.