This Halloween, a celebration of Jack Terricloth's DIY art at C-Squat 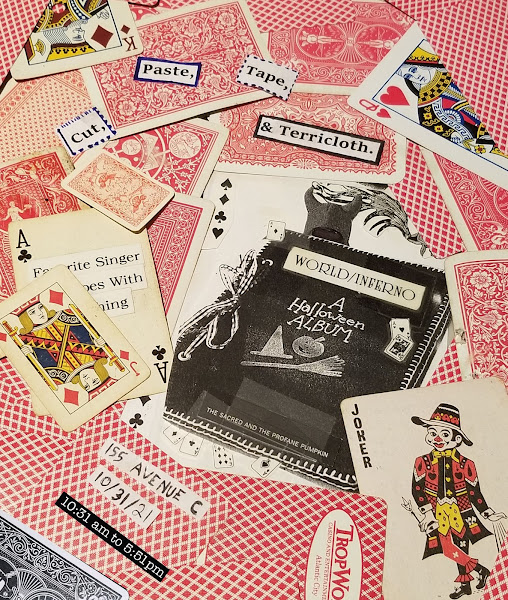 On Halloween this Sunday, C-Squat hosts a daylong event titled "Cut, Paste, Tape & Terricloth."
The show will present "a modest selection" of the late Jack Terricloth's original cut-and-paste artwork. Terricloth, a former East Village resident and lead singer of the World/Inferno Friendship Society, died in May at age 50.
Here's more background via the EVG inbox...

Without fail for 23 years, Brooklyn circus cabaret punx The World/Inferno Friendship Society have faithfully raised The Great Pumpkin at their annual HALLOWMAS celebration. Sadly, due to the recent tragic passing of their lead singer, their version of Hallowmas will not take place this year, or ever again.
We cannot try to begin to replace that event, but we can do our part to help make sure that Jack is remembered on this sacred holiday. So, in honor of Terricloth, we are setting up a small pop-up exhibit as a tribute to our fallen Halloween-obsessed friend.
Starting in the late 1990s, Jack used to make postcards for his band's cultish following. The cards would advertise the Inferno's latest shows, capers and misadventures. At a time when the internet was replacing how punk rockers mainly heard about gigs, Cloth refused to give up the art of the physical mailing list. He wanted some things to remain tangible.

We will display the original cut-and-paste postcard collages in all of their wonderful disintegrating DIY scrap art glory. We will also have some original handmade punk show flyers and pages to a lyric zine that he made back in the late 1980s.

A visual cut-and-paste elegy hoping to pay respect and send a message back to him about the work that he did. Because it mattered.

You can check out the show Sunday from 11 a.m. to 6 p.m. at C-Squat. You can enter through the Museum of Reclaimed Urban Space, 155 Avenue C between Ninth Street and 10th Street. Find more info here.
Also, on Sunday ... back to the EVG inbox...

After the art show, a number of World Inferno fans will gather in Tompkins Square Park to play cover songs of their music. The band was booked to play a show in the park this Halloween. Obviously, the band will not be appearing but dedicated Infernites are still gathering around 5 p.m. to make sure the songs do not go unplayed this Halloween.

RIP Jack T. This month was supposed to be yours.

We love you, Jack, and miss you a lot. First Halloween without you won't be easy. - D.S.

His passing was sad news this year. Such a surprise. Glad to hear about all this happening though. World Inferno was such an experience.