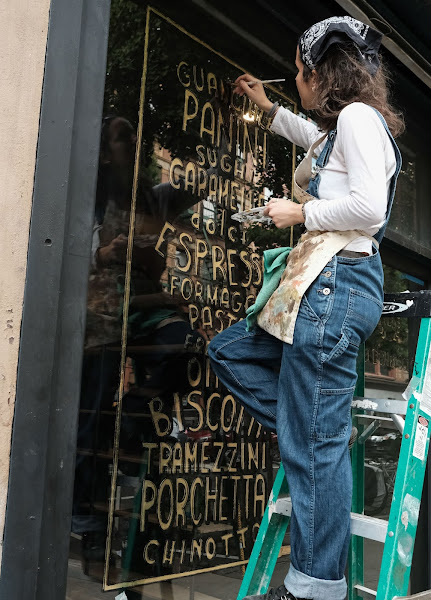 Photo by Derek Berg
As we've been reporting, Via Della Pace is reopening in a new space at 87 E. Fourth St. between Second Avenue and the Bowery.
Turns out co-owner Giovanni Bartocci and company have another venture on the block. Work has been taking place at 60 E. Fourth St. in recent weeks on an Italian deli/cafe going by, we're told, Via Della Scrofa.
The handpainted signage lists items such as espresso, biscotti, tramezzini, chinotto and porchetta.
No word on opening dates for either business.
The 17-year-old Via Della Pace lost its home during the devastating fire on the southeast corner of Second Avenue and Seventh Street in December 2020.
The Italian restaurant had been closed since the previous fire on Feb. 10, 2020. At the time, the owners were unsure if they would ever reopen on Seventh Street. The fire last Dec. 5 took care of that, as workers had to demolish the five-floor building.
Posted by Grieve at 5:17 AM

Email ThisBlogThis!Share to TwitterShare to FacebookShare to Pinterest
Labels: Via Della Pace, Via Della Scrofa

I loved going to Via Della Pace in the 90s. Was it a different owner back then?

This is wonderful news. I’ve been looking for a nearby place to treat myself to Italian take-home, special-occasions goodies ever since Dean and Deluca closed. I’m surprised there aren’t more places like this in the East Village. We used to have all kinds of them back in the 90s.

I can't wait! So glad they are able to open up another business. Crossing my fingers they do well enough to open a full restaurant with a bar to watch Serie A.

wow, best news of the week so far! I can finally get my fix since Porchetta closed down, buon cibo!!

They are open!!!! Today is their grand opening. Lots of italian produce, sandwiches, coffee. Restaurant is still not open, which is a shame but think theyre finalizing building and construction.

Yea yes yes we are open!! Thanks Derek and thanks EVGRIEVE