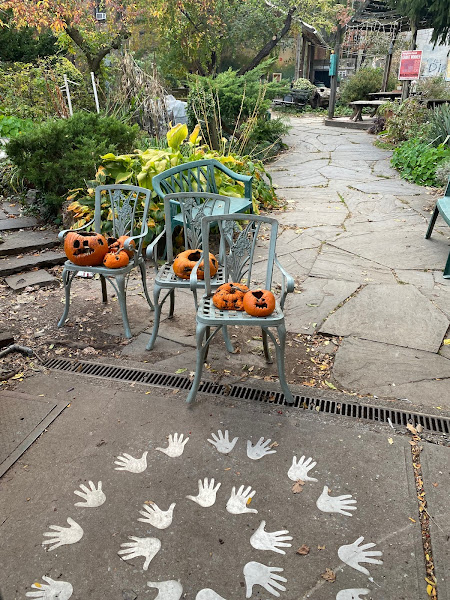 Photo by Steven yesterday at the 6th & B Community Garden
• ICYMI: A nonprofit sued the city for allegedly not including enough minority- and women-owned businesses in the construction contract for the East Side Coastal Resiliency Project (NY1)
• A higher waterfront and a lower FDR may be on tap for Lower Manhattan (The City)
• The debate continues over outdoor dining (The New York Times) ... while the City Planning Commission voted unanimously for a zoning text amendment (Gothamist)
• Opinion: The East Village needs more Citi Bike docking stations (amNY)
• An unnamed, pro-Eric Adams labor source alleges the next mayor's inner circle is running a campaign to block Carlina Rivera from becoming City Council speaker "because she's a former dues-paying socialist who voted to defund the NYPD" (The Post)
• And see Adams on Colbert (here and here)
• A trip to the just-opened Via Della Scrofa on Fourth Street (TONY) ... first reported by EVG here
• Suspect wanted for robbing a 24-year-old woman and dragging her down the stairs in 2nd Ave. building (PIX 11)
• Drivers are "continuing to speed like mad" on NYC streets (Streetsblog)
• Inside Chinatown's newest food court (Eater)
• Check out the film series "Punks Don't Go Home For Thanksgiving" (Metrograph)
Posted by Grieve at 11:00 AM

"because she's a former dues-paying socialist who voted to defund the NYPD". That's about all she did. I would have voted for Kika, the Wonder Dog if I'd had a real choice.

More bike docking stations? More EV residents free parking on streets is being taken away? Are EV residents allowed to own a car only if they can pay for private parking which costs $500-$750/month? Outrageous. How about if bike stations are only placed in 2 Hour Meter Parking zones instead! Take away revenue producing meter spots first. Then we will see how fast the City D.O.T. and Mayor's office review this idea.

Please more bike parking! It is so tough to commute daily when it is impossible to find a bike dock. Never mind the cars that sit for free on the street all day

For what it's worth, Miss KiTa the Wonder Dog® supported Allie Ryan because she is our neighbor, is super knowledgeable about the many critical issues faced by our neighborhood and city, and she is also a very nice person. '

Miss Kita cannot in good conscience say the same about the incumbent who in her view is an opportunist of the very lowest order.

Miss Kita does appreciate the shout out in any case! Regards, JG

Citibike stopped doing the concierge (their word) service where an employee would keep docks open and stack the overload until the balancing truck picked them up. The East Village was always a problem before and now after the EV and Canal are impossible.

There's always a tradeoff with public space. There should be no free parking at all in Manhattan with reasonable monthly and yearly passes.

@Jose Garcia - Well said. You have described our Councilwoman to a T. Carlina is all about Carlina, nothing else matters.

@1:39PM: Just think of it as the subway at rush hour, where you can't expect to get a seat. Did you think being on a bike would exempt you from rush-hour issues?