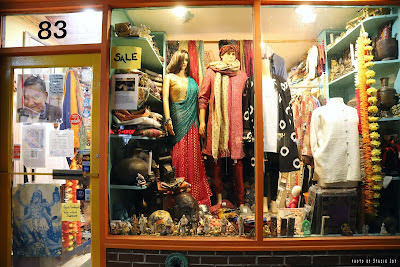 Photos from 2019 by Stacie Joy
Updated: The shop's last day is Jan. 31.
Dress Shoppe II, the Indian boutique at 83 Second Ave. between Fourth Street and Fifth Street, is closing at the start of 2022, ending a 20-plus year run in the East Village. (The business dates to 1978, first starting on Broadway, per this 2016 feature in The New York Times.)
Over the weekend, NBC News checked in with a feature on Dress Shoppe II, where Saroj Goyal has been doing her best to keep the shop going since her husband of 50 years, Purushottam Goyal, died in September 2019.
The story confirmed the closure. (There have been signs up in the store as well. On a recent trip, Goyal told us of her plans to close in January. There was also talk that she'd relocate to a smaller location.) 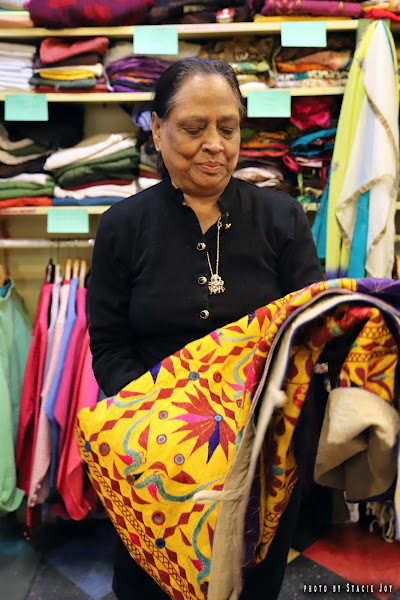 You can read the NBC piece here.
Here's an excerpt focusing on clearing out the space...

Goyal is worried. The sheer number of things that need to be moved out is dizzying. Her husband was a collector, and his life's passions are housed in the shop's back storage area, reminiscent of the Room of Hidden Things from "Harry Potter."
But for now, it's business as usual. The shop is still a colorful, warm haven for regulars and the city strollers who happen to stumble inside. With a small team of employees, she's keeping the spirit alive while she can.

In July, Brandon Stanton, the creator of the Humans of New York storyteller series, featured Saroj on his @HumansofNY Instagram account. He also got involved in helping her business, launching a crowdfunding campaign in the process.
Amplified by Nicolas Heller, aka @NewYorkNic, the campaign raised more than $412,000 in the first 17 hours.
In the previous post, you can read more about this, including the financial arrangements with the landlord, the Cooper Square Mutual Housing Association II.
You can find the Dress Shoppe II Etsy account here. The storefront is open from noon to 8 p.m. daily, with 1-6 p.m. hours on Sunday.
Posted by Grieve at 5:30 AM

My heart breaks for Saroj…too many thoughts to articulate here instantly. SHAME on greed that has KILLED the East Village. Now people are gravitating towards other boroughs as a result.

Ruth Anne Wagner, FYI this store was well below market rent. It has almost as much storage/basement space as the store itself. The landlord is Cooper Sq MHA not a rogue landlord. I know this because I served three terms on the MHA board. Everyone is thrilled that so much money was raised for them.

I hope Mrs. Goyal will be able to rest & be relieved of the stress of running the shop. And I also hope she knows how much this community values her and that we all wish her well.

Ah this is sad.

hoping to stop by and stock up in person; those blankets are lovely!

I used to LOVE shopping at this store - nesting tables, imported alter pieces, unique decorative housewares, etc. - but when they changed the merchandise from all the cool stuff mentioned hidden in the back to mostly dresses... I often wear pink but I'm not a dress guy to that left me out :)

so the $500K raised from Gofundme wasn't enough? (honest question)

FYI, I spoke to Mrs Goyal over a month ago about her decision to close the shop and she said she’s been harassed by the landlord, determined to push her out. To the point were she would find cigarette butts in the basement to report her for fire hazard. So yeah not a rogue landlord!!!