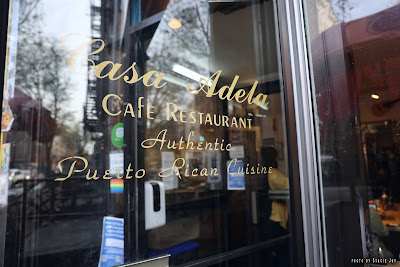 Photos and reporting by Stacie Joy
The future of Casa Adela at 66 Avenue C is potentially in jeopardy with a rent hike the owner says is not feasible.
Friends and supporters of the restaurant that has served authentic Puerto Rican cuisine here between Fourth Street and Fifth Street since 1976 sounded the alarm last week, reaching out to media outlets and local elected officials.

According to organizers and other published accounts, the building's landlord — a Housing Development Fund Corporation (HDFC) — is looking to increase the rent from $1,350 to, eventually, $6,750.
Nicholas Heller, aka @NewYorkNico, reported this:

The old lease expired a few years ago. Under it, they were paying $1350 per month for the 715 sq ft space. They offered their landlord, a limited equity HDFC cooperative, that they would start to pay $3000 per month, plus 3% increases for each year for 10 years. The landlord refused the offer: their bottom line is $4000 in year one (backdated to august) and $6,750 starting in year two of the lease, and 3% increases after that, which is a 480%+ increase in rent and sure to force the business to close.

On Thursday, community members met at the restaurant and created a Save Casa Adela Committee. 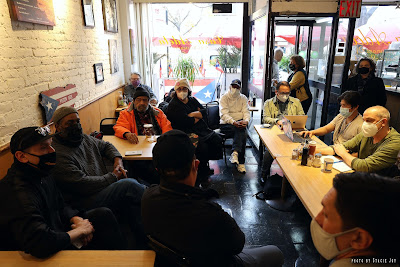 For now, there is hope a deal can be worked out between owner Luis Rivera and HDFC reps.
According to Frank Gonzalez of Loisaida Realty, who helped organize the Save Casa Adela Committee, the two sides will meet today. [UPDATE: The meeting is now at 6 p.m. on 12/8]
"[We] hope they can work out a fair deal for our beloved Casa Adela," he said. "As of right now, we are praying for the best but preparing for the worst."
They previously scheduled a press conference at the restaurant for tomorrow and a rally on Saturday morning. Gonzalez said that depending on what happens today, they'll move forward with both events.
Adela Fargas started her namesake business here in 1976.
Before opening Casa Adela at 66 Avenue C, she ran a luncheonette one block to the south. It was there, as a feature in The New York Times from 2015 points out, that she perfected the seasoning for her famed rotisserie chicken.
She died in January 2018 at age 81. 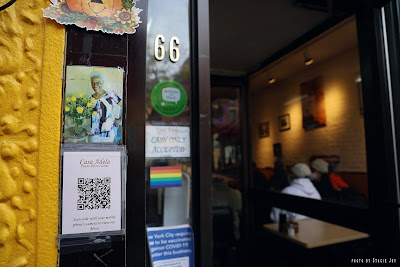 Rent hikes across the city to help continue killing off small business. Only part of the city moves back and REBNY can’t wait to gut this town more.

Another case where the business offers to pay an increase (one that doesn't sound unreasonable to me) but the landlord still wants more. I'm reminded by the old Bean on 1st Ave that offered to pay a significant increase in rent, but the landlord held out for Starbucks.

$1350 seems like low rent, seems owners should have slowly increase the rent years ago. wonder when that lease signed. My guess pre sandy...


Taxes on that building increased more than the rent.

It pains me to say it but $1350 is a really low rent for a restaurant space, and I think it's given Casa Adela a little too easy a time for too long. I love them and their food, and would never want them to close, but I certainly felt like the service could be frustratingly casual at time, particularly for take out. They should be the go-to spot for take out rotisserie chicken in the neighborhood, but in the past it just took too long to get my order and it's kept us away.

SBJSA. But of course, the current CC President and the future CC President won't let it come up for a vote since, as per the East River Park news today, the NYC CC is bought and paid for by REBNY.

to be clear (in continuable to my comment above), this is what Casa Adela has agreed to, the landlords are the ones who are being unfair.

Absolutely adore Casa Adela, but agree with other commenters... $1350/mo was a sweetheart deal they should have known was going to come to an end! Agreed that $3-4k is likely fair.

On the other hand, aren't HFDCs supposed to essentially serve the public good? Is there any regulation/management of their commercial spaces?

raising rent post pandemic by greedy landlords is terrible. businesses are still struggling to come back unless they are owned by big corps with deep pockets.
for those commenting it's a sweetheart deal, do you remember the needle exchange that used to be closeby this location? or are you from out of town? lol...

3000 is still below market value for the location, so they'll probably compromise half way.

The retail spaces are usually market rate and the money goes to maintaining the building. The housing is the common good and this rent is 3x below market rate. They had a great deal for a long time.

It's infuriating to see HDFCs, which are themselves a form of public support of housing, turn around and screw small, long-time commercial tenants. $1350 may have been too low, but they are offering to more than double to start. Because of the purchase structure of HDFCs (where the annual income caps are quite low but you'll still need to come up with a couple hundred of thousand in down payment/closing costs), a lot of them seem like they fill up with people who aren't actually low-income so much as cash-flow poor--i.e., well-off young people at the start of their careers whose parents will pay the large down payment required. (This is an anecdotal impression but it would be interesting to see a study.) I expect such people tend to be less neighborhood-minded and more interested in increasing the value of their real estate.

"you'll still need to come up with a couple hundred of thousand in down payment/closing costs)" - it's actually way less than that.

REBNY needs to be dismantled immediately and the practices of ALL predatory landlords put on blast. it is out of control and the rent is TOO DAMN HIGH. the landlords are just whining as they had a few months of experiencing the stress that EVERY renter experiences during the pandemic, the dread and fear that one will lose their home/business/etc. due to lack of funds. cry me a river, landlords. Your money has been sucked from the renters in the city throughf decades of inequality, buildings exploding due to faulty gas lines, and apartments lacking proper heat/hot water/etc while you buy another car/yacht/home in the suburbs and smokescreen the issue with 1-2 affordable housing units in buildings that are by no means affordable to the average person.

I live in HDFC, and frankly your impression has nothing to do with the realities of who is living here.

Disappointed to see the comments section infiltrated by all of you who'd rather the rent go up to $4K, which would lead to Casa Adela closing or substantially raising their prices. Because, if you think their rent is low and that it should be tripled, one of those two things will happen.

The thing is, the low rent is the reason it's super cheap (not to mention BYOB). And the fact that it's cheap is good for the people in neighborhood who aren't making $150K a year. You remember them, right? They're the ones who kept the neighborhood going while you were in prep school in Greenwich listening to hip-hop records.

You want a tenant paying $4K/month? Well get ready for another mediocre faux-whatever-$34-entree-$16-glass-of-bad-wine sH%#hole. But actually, judging from how popular those strip-mall-worthy-eateries are with all of you, that actually is what you want. So...never mind.

Who are you guys trying to kid? Obviously the original HDFC tenants got in at very low cost, which was the whole (and completely valid!) idea. But if an HDFC apartment now changes hands for just half a million--perfectly common in Manhattan, just check StreetEasy--you'll need around $125K in down payment and closing costs. How is someone earning, e.g., $60-$75K supposed to save that up? They don't. It's their parents, by gift or by inheritance. And for the ones that allow higher incomes these days, well, that just puts them in the regular yuppie class.