[Updated with video of the crash] Another day, another car drives into Tompkins Square Park 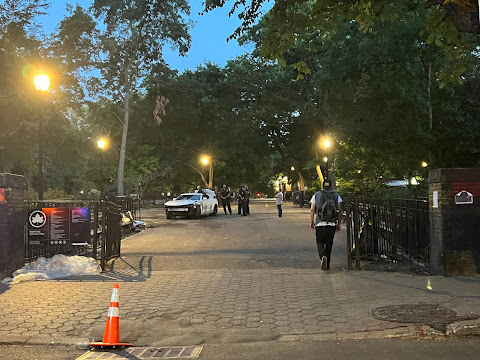 The NYPD was on the scene early this morning after someone attempted to drive a car through Tompkins Square Park before crashing into a fence.
Christopher J. Ryan took these photos at 5:48 a.m. ... 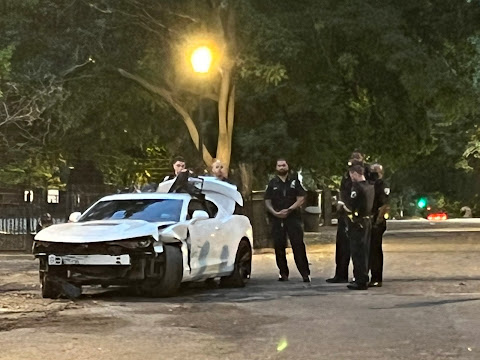 The working assumption is that the car entered the Park on Ninth Street and Avenue A ... and headed east before colliding with a fence just past the dog run.
At this point, we don't have any other details, such as the condition of the driver or the number of passengers.
On Sunday morning, a man drove into the Park after allegedly hitting a female companion and sparring with people who came to her aid.
Updated 9:13 a.m.
Here's a look at the collision site... given the skid marks and impact at the benches, observers believe the driver was speeding... 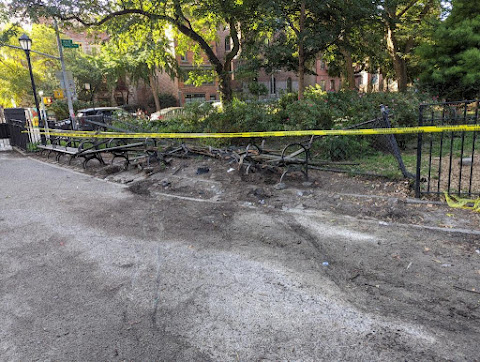 Thank you to the folks at the Tompkins Square Dog Run for the photo.
Updated 10:30 a.m.
A reader shared this surveillance footage of the car driving at a high rate of speed and smashing into the benches and fence...
Here's a second video from the reader... showing the aftermath of the crash. Several people in the Park confront the driver, the man in shorts and a ponytail, and take his keys... and wait for the NYPD... the video does not show what happened after the police arrived and what, if anything, may have happened to the driver...
Posted by Grieve at 9:00 AM

What is this city turning into...

I've seen uber/lyft cars crossing the park on 9th from B to A a couple of times this year...

Nearly every evening and night, 2nd Ave. sounds like a Monster Car Jam is going on. Should we alert our Council Member? - oh wait, she's busy running for something else. Oh well.....

The fact that it's a Ford Mustang also leads me to think it was speeding. How much do you wanna bet this car used to enjoy a "career" of drag racing on public streets?

They are supposed to lock the gates at nite , guess police are doing anymore ???

Time to put bollards at all the park entrances. Let is have the cool iron bell-shaped ones, not the ugly concrete ones.

Anyone know if there was a passenger? That looks like it could have been really bad on the passenger side of the car w.r.t. the iron fence.

Just what the heck do you need to do to get arrested in NYC?

This shouldn’t be able to happen in our parks. We’ve got strung out people not coordinated and toddlers, also not coordinated. It should not be possible for cars, fast motorized bikes or fast bikers to go through the park. This is a park for pedestrians. You can contact the new parks Dept commissioner and let them know about these two incidents in the park. https://www1.nyc.gov/assets/home/mail/html/maildpr.html

9:39 is right. I'm passing through the park alot but no means a regular and I've seen at least two cars cruise across the 9th Street road and one weaving past the temperance fountain in the past year.
2:55 we're gonna need the fancy euro bollards that lower so the cops can still cruise through, lol.

I am absolutely not surprised in the slightest that it's a douchemobile model of low-grade "muscle" car with illegally blacked out windows and probably fake plates and one of those stupid exhaust mods which make the car sound like a toddler on the potty. The guys who drive these things have the mental age of 6.

If you see them, snap a photo clearly showing the plate and upload it to the TLC's complaint system via the ReportedNYC app. They will absolutely get a fine.

not defending cars in the park , but police do patrol it in unmarked cars from time to time

Wonder why the 3 major papers The New York Daily News , The NY Post and the New York Times have not covered the car incidents in Tompkins Square Park ? Obviously from the amount of comments these EV Grieve stories have generated a lot of attention. These days Tompkins Square Park has lost it's media attraction except when the NYPD busts houseless people in tents. Message is atttack a woman with a shovel and drive into the park after or wreck a car in the park and damage park property and the Cops take no action but put up a tent and they call out an army to arrest poor people.

There was a minivan that drove into the park at 9th St and B this evening. The guy was obviously lost and stopped when people screamed at him that he was in a park and not on a road. He struggled to turn the van around, but did so and left. I'm wondering if GPS is telling drivers to turn onto 9th Street from Ave B?

I was wondering about this too-it wouldn’t be the first time.