Photos by Steven
The barricades arrived once again (late last week) around the chess tables at the entrance to Tompkins Square Park at Seventh Street and Avenue A... 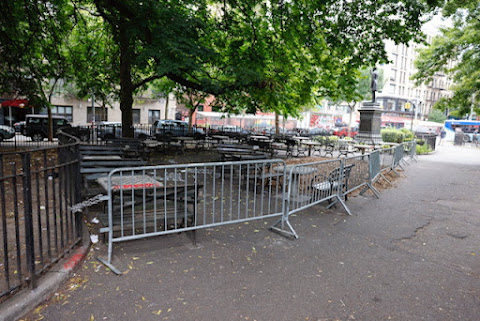 The city did this back in June, with a member of the Parks Enforcement Patrol saying that this section of the Park is "problematic." Eventually, the barricades are removed ... and nothing ever really changes.
This area was blocked off several times during the past two summers. During that time, there were reader reports about drug use, stolen property and fights. 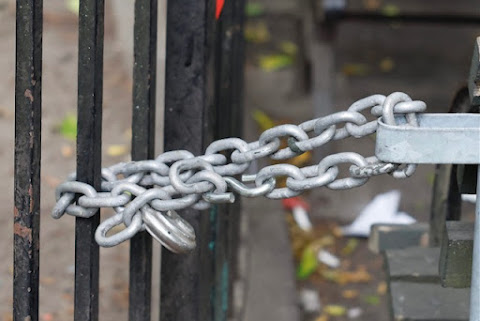 This city has no healthy solutions to offer. Only violence and bandaids.

So depressing how there’s so little public space in the neighborhood and it is being barricaded from us to use . No word from our elected officials.

Does this happen in Central Park? It doesn't seem so, so how does the NYPD enforce order up there? I also assumed there were rules about people not being allowed in the park during certain hours. Shouldn't the police just clear it out every night?

What is really gross about the people who hang out there is they just hurl all their trash (and God knows what else) over the fence onto the grass. The smell is awful.

I walked past those chess tables the other day and they were full of homeless junkies all camped out with their personal belongings on the chess tables shooting heroin into themselves right in broad daylight it was a disgrace. They then pass out unconscious on the ground and on the chairs. I know shutting off the area is a harsh response, but the only other option is to have a police officer there 24 7 to keep them out and from coming back to take over the area. There are no easy solutions to this continuing problem.

Who’s park our park and the dog days of aug. Are up on us

They had a cop present there 24/7 protecting the statue of sam cox when there was umors it was going to be toppled...

This is the only part of the park that doesn't smell like dog poop.

It is quite sad to become witness as a resident to some of the drug addicts who pass out with needles in their arms while literally shitting themselves in this area. I walked past Tompkins today to the farmers market. There were endless mounds of trash everywhere from the entrances to the trash bins to the benches. And with the heat, it stank something awful. I feel this park has been completely neglected. I wonder if this is even a priority anymore. Makes one wonder where our tax dollars are going to. Very sad. I miss Tompkins when it was properly maintained.

Agreed about decline of the park. It is really poorly maintained after years of improvement we’re back to how it was twenty years ago. And at a time when outdoor space is more vital than ever. Where are our elected representatives when we need them to address actual problems, not running for Congress?

May be a old fashion clean up the park party sure mr Flash, knows a band or two who would play while
People help out and maybe a pizza shop slings in some pies great and upbeat to get there name passed on Let’s roll people

I remember the morning I woke up, started my walk to work on 8th street and discovered the entire park closed & boarded up. Wouldn’t be surprised if it happened again — wouldn’t mind too.