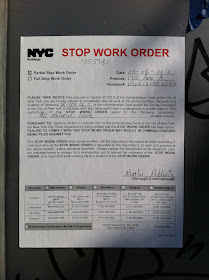 On Sept. 9, we reported that workers installed three AC units adjacent to the incoming 7-Eleven at 500 E. 11th St. ... placed inches away from the bedroom windows of tenants.

One neighbor told the No 7-Eleven blog:

The units make a loud “WHOOSHING” noise every 15 minutes and since all the bedrooms are located off the alley, there has not been much sleeping going on in either building.

The city investigated complaints from neighbors and issued a Partial Stop Work Order.

Any progress to note since then?

"We are roundly being ignored by 7-Eleven and Westminster NYC [the management company]," said resident Brian Katz. "Westminster is unapproachable — guarded, cold, borderline obnoxious. The [construction] workers are diligently going about their jobs... still, both inside and outside. So, the order doesn't mean much — surprise, surprise!"

As for those three AC units, Katz says they are too loud, too close to the windows, structurally unsound (due to vibrations), and they are obstructing escape routes. See for yourself.