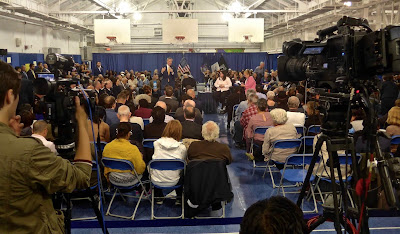 EVG regular Peter Brownscombe shared these photos and this one item of particular interest:

During the proceedings, de Blasio said that a mistake had been made in the past and his administration would take steps to reacquire the former P.S 64 and CHARAS/El Bohio community center on Ninth Street between Avenue B and Avenue C.

…the decision made a long time ago by the Giuliani administration was a mistake. For the Giuliani administration to put that building into private hands failed miserably, and we’ve seen the negative effect that has had on the community. So I’m announcing tonight, the city’s interest in re-acquiring that building. We are ready to right the wrongs of the past and will work with Council member Mendez and her successor (almost certainly Carlina Rivera) to get that done.

The mayor did not expound on this.

Some background on this ongoing story. Developer Gregg Singer, who bought the property from the city in 1998, had reportedly been pushing de Blasio's administration to remove a stop-work order that has been in place since 2015.

According to public records, Singer is continuing to retain lobbyist Jim Capalino, a former de Blasio ally, for the remainder of 2017. 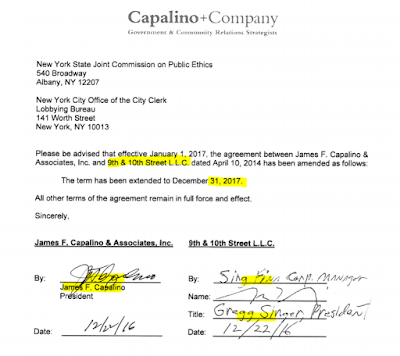 Among Capalino's lobbying targets: the Office of the Deputy Mayor for Housing and Economic Development and the Office of the First Deputy Mayor. Capalino, according to a New York Daily News story in March 2016, steered $50,000 to de Blasio after pushing the city to lift the deed restriction at the Rivington House. (The mayor said in August 2016 that he has cut off contact with the lobbyist in the wake of multiple investigations into his administration, per Politico.)

It was previously reported that Singer has a signed lease with Adelphi University, with hopes of having students move in by the fall of 2018. That move-in no longer seems plausible given the current state of the building.

Preservationist groups and other residents have been opposed to Singer's plans, and want to see a return of the landmarked building to use as a cultural and community center.

...Singer has no intention of selling the building, according to his spokeswoman, who said the property is appraised at $60 million and that the owner has already poured $80 million into upkeep.

"Singer has absolutely no plans to give the 'building' back," spokeswoman Nicole Epstein wrote in an email. "The city is trying to be a bully here." 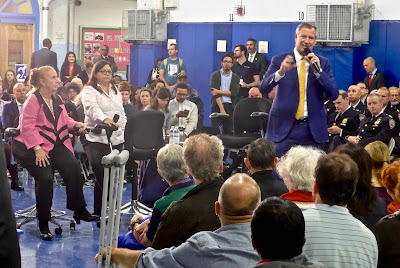 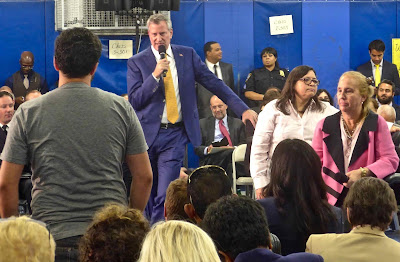 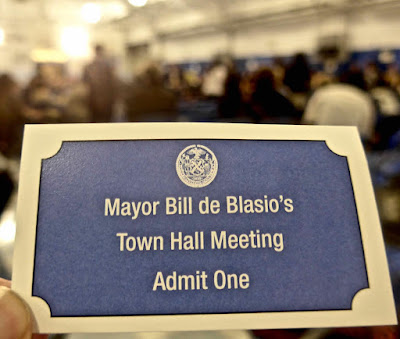 BDB said "the CHARAS building" it should and must return as a cultural and community center.

I saw Carlina Rivera speak at another forum, and she talked at length about her desire to reclaim that building for the community. I voted for her because of that. She sounded serious about getting it done. Let's do all we can to support her effort.

This is a dog bone for the EV's voters. It will take years to get that building back and for what? To turn it into a club with day care. WHAT A MESS.

I don't believe De Blasio; to me it's one more "nice thought" that will never be acted on. He's throwing nice phrases to his audience in an election year is how I see it.

I'd love to be wrong, but Singer has acted irrationally for 20+ years now, so why would he suddenly become rational? He's gonna want boatloads of $$$$$$$ for this place, now that he's sat on it *and tried to wreck its value* for all this time.

I hope the PS 64 building goes back into genuine community hands for the actual good of the area, but I honestly don't see it happening. Again, I hope I'm wrong.

80 million into upkeep? That sounds a little high. The crew that gutted the interior were obviously discount clowns and other than that it's an occasional security guard and the scaffolding. Isn't Singer getting sued for cheating a west coast partner on upkeep payments?

I doubt there's any way for the city to eminent domain it and Singer would take less than 80 million cash but not a lot less. De Blasio knows this and is just talking.

The building is a eyesore 80 million in upkeep he got robbed! The nieghborhood has seen more families moving in with young children a return to a school makes sense. A cultural center and community center should no longer be the objective given the changing demographics on the nieghborhood.

That building has been methodically destroyed for decades ,from tearing out the copper dormers on 10th Street side to bulldozing the basement .Not to mention leaving broken windows and all kinds of water damage
To occur over the years , to a landmarks building!I believe he should be fined for the destruction and neglect
And made to RESTORE the building before the city takes back the building for a discount price,That makes
Sense to me,anybody else catching my drift ??

Singer must have someone from the Trump administration working in PR, $80 in upkeep for a building he spent $3 million for, then let rot, demolished many of the decorative elements which would help landmark this once beautiful Beaux Arts building.
The mayor will not stand up to Singer and other developers unless he wants to end his political career. Singer could be looking to have city over pay for this property screwing tax payer but most likely this game of chicken will continue until the place collapses.

Yes, Tom Stir: that makes absolute sense to me.

I wasn't even aware he'd bulldozed the basement, but I'm not surprised; how many condos do you know of that have auditoriums?

This city can and will use eminent domain especially when it serves their bottom line. Case in point, the Columbia University expansion in Harlem.
http://www.nytimes.com/2010/06/25/nyregion/25columbia.html

The building is landmarked; that's a done deal, and the only reason Singer hasn't taken it down completely yet.

To find out the truth regarding 605 E. 9th street see: www.oldps64.com
Gregg Singer