The Post has an exclusive cover story today about the city turning over the rights to the former LES squat Bullet Space to its residents.

It's difficult to tell how the paper feels about this. 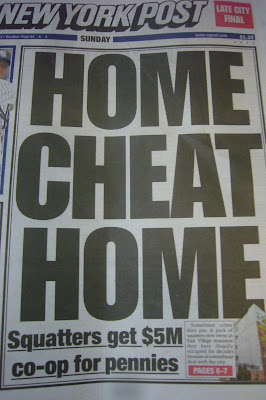 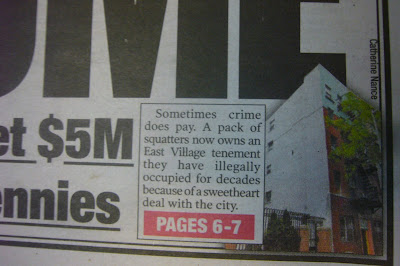 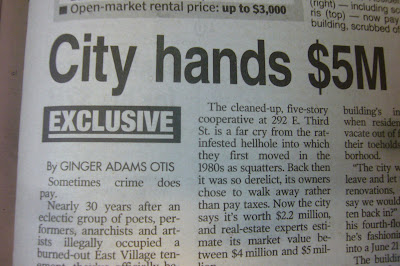 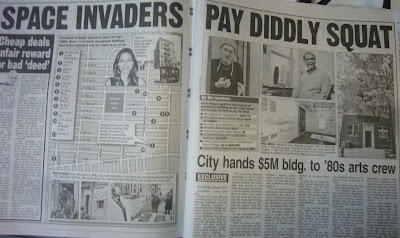 The exclusive two-page spread includes an opinion piece by Henry Stern, the former city parks commissioner who is president of the nonprofit group New York Civic.

[G]ving away buildings in lower Manhattan to people who break into them and declare themselves owners should not be considered the new public policy of the city of New York.

Over the years, squatting, like graffiti, has been romanticized as an expression of popular will and an assault on the establishment. That may be true -- but it is not the best way to allocate scarce housing among a large and deserving population.

Previously on EV Grieve:
Bullet Space is the first of the former LES squats to take over ownership of building from city
Posted by Grieve at 11:40 AM

If only I could have read about this. Someone stole my Post from my lovely Alphabet City stoop. (Yesterday, they stole the Daily News. Rarely to they steal the Times or the Journal.) Sigh.

The are just jealous--they do not know what work and effort went into making these dilapidated buildings up to par and habitable--these yunnies/etc. are ignorant and haven't a clue--and they think they are know it alls.

kudos on having the entire story last week, well before the Post.

you're the man, griever

squatting is theft. plain as day. that doesn't mean that hard work didn't go into rehabbing these buildings...that is not the issue. they stole the building. maybe they should have been allowed to do this...but they were not and they decided to steal it anyway. there is no debate on this issue.

of course, at this point, if the owner of the building was so delinquent in terms of taxes and upkeep and the like and abandoned the building...this is what he gets and it is fine.

but don't confuse the issue - squatting is illegal because it is theft. "fighting the man" does not make it OK.

Squatting is not theft, it's utilizing land that would otherwise lie vacant. The owners of these buildings left them in order to avoid paying taxes, in legal terms, this is called abandonment and when done with moveable property rather than land anyone can take it. I honestly have no idea why anyone would express such animosity towards the squatters.
The real crime is that speculators with no stake in the community are permitted to buy real estate, and then if it turns out not to be profitable, leave it to rot with no consequences.

If these squatters deserve to go to prison for "theft", then so do the developers who walked away from financial obligations to the city and to their financiers.

So, before we cry for the blood of people who took an undesirable asset and made it desirable, perhaps we should ask for a pint or two from the people who let it become a shithole in the first place.

How is it an "exclusive" to cover public information?

Just commenting to rectify what seems to be a common assumption- these building were NOT privately owned. They were property of the city and had been confiscated as per 1970's & 80's city policies regarding tax delinquency etc. So technically these buildings were public property. It was common at the time for the city to sell tax delinquent properties for as little as $1.00 with certain requirements regarding rehabilitation and construction timelines. I hope this information helps people see entire subject of Squatting in Alphabet City from another perspective.