The Elephant: "We truly think we are good neighbors" 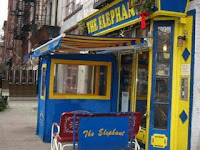 Last week, I reported that Thai eatery The Elephant on East First Street had been shut by the city for allegedly serving an auxiliary police officer who is a minor. (And they've had at least two other run-ins the past two years, as Eater reported.)

In that post, I mentioned the fiasco from last May in which a manager at The Elephant reportedly called the police while a group of teenage girls lined up to receive free prom dresses next door at the Lower Eastside Girls Club. For some residents, that episode left a lingering resentment toward the restaurant.

After last week's post, Adria Jover Sala, who said she manages The Elephant, contacted me.

For starters, she said that the manager who called the police last year was fired "after that tremendous mistake." She said there is a new staff. "We have people from Morocco, Senegal, Ecuador, Ivory Coast, Spain, Mexico... most of [them] with sons and daughters.

"We are all trying to do our job the best we can. I understand if The Elephant, years ago, caused some trouble in the hood, though right now it is run by new management and we are committed to our beloved First Street. We truly think we are good neighbors. We care for our street, have friends all over the block on First Street. We take the UPS deliveries for our building. We let kids from the park use our restroom... we are been living here so many years and I think we deserve a bit of respect."

But did they serve a minor?

"We are sure the guy was over 35... though if we took the risk to go on trial for that and by any possibility the undercover [officer] was 18, as it says in the report, then the stipulation was to close us for two months and a fee of $15,000."

As part of the penalty, the city is shutting down The Elephant starting today for one week. The restaurant will also have to close for one week in May.

"The city is so incompetent with those rules ... they don't let you work and improve the place while you are closed. This is like kids, you do something bad and they send you against the wall for two hours... the only difference here, we are talking about a business with families, children, etc. who depend on them ... doesn't the city realize the impact?" 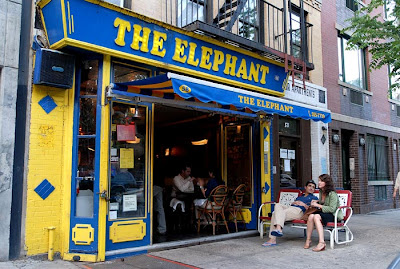 I asked Adria, who is originally from Barcelona and has lived in the East Village for 10 years, is she believes they are receiving unwarranted attention.

"We feel we are unfairly targeted by the city. Everybody knows where all minors go for drinks with their fake ID, why the police don't spend their resources with better efficiency than coming to a small restaurant to shut you down," she said. "At this point I'm quite desperate because [the city] believes that we are a club or something like that and we just are a small restaurant, which for the last two years everyone is out before 1 a.m... I just hope the neighbors could appreciate our commitment.

"The worst part is, I'm not sure if we are going to survive with this two-week agreement anyway."

[Image via; larger image via]
Posted by Grieve at 7:00 AM

Email ThisBlogThis!Share to TwitterShare to FacebookShare to Pinterest
Labels: First Street, The Elephant

I live on 1st Street and the truth is, The Elephant has made a major effort to be a better neighbor.
Ironically, the worst problem place on the block is Cozy Cafe, a hookah bar for the pre-teen set!!! How do they get away with serving party limos full of high-schoolers? Just have an off-duty cop from the 9th as your doorman!!!

Totally agree. I lived on that block for 15 years and the Elephant was nothing but good, especially compared to the shitty party places that opened up in the warehouses next door, the tragedy that was Chez Es Saada and its various reincarnations, and the underage mecca of Cozy Cafe. Even the great Prune has its annoying band of brunch prunesters that wait hours on the street for overpriced brunch.