A rainy afternoon look at a Citi Bikes docking station 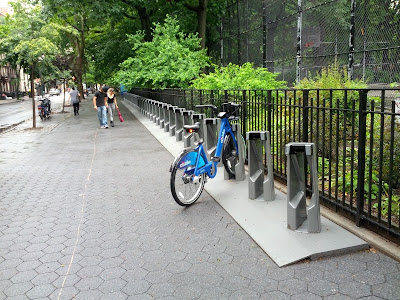 First, we promise not to post about a docking station every day.

Several people have told us that this docking station has been a little buggy (or, "wildly dysfunction," as one person put it) ... For instance, on Saturday, when you tried to return a bike, the green light would not go on signaling that it was locked into the rack.

One Citi Bike user thought that he had safely locked his rental back in place here ... only to learn later that someone took it for a 7-hour joyride.
Posted by Grieve at 4:26 PM