Someone continues to vandalize the Citi Bikes docking station on East 13 St. and Avenue A 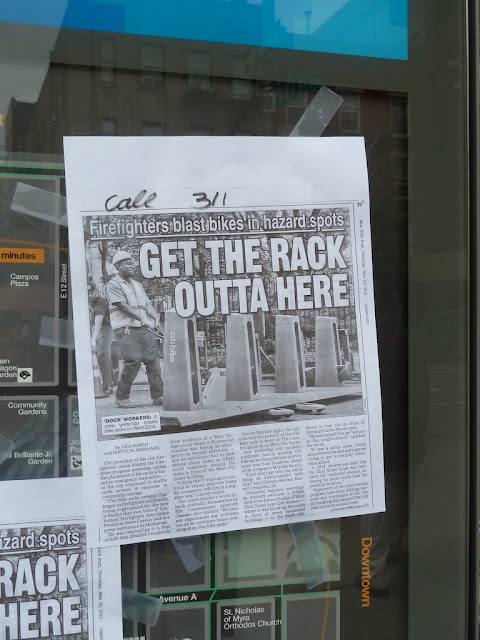 The Citi Bikes docking station on East 13th Street at Avenue A continues to a source of anger for an unknown person or group of people.

On May 17, someone hung anti-Citi Bike flyers and slapped a large hunk of dog poop on the unoccupied docking station. (Later cleaned off.) The following week, someone taped photocopies of a Post article titled "Get the rack outta here" on the docking station ... with instructions to call 311.

Now, a reader on that block notes that the anti-Citi Bikes campaign has moved on from poop and colorful flyers.

"They also said it this was not the first time this station has been vandalized."

Meanwhile, on Sunday, I saw a woman remove a bike from this station... she got about 50 feet down East 13th Street before realizing that the tire on the bike she selected was flat. It was likely flat when she backed it off from the docking station.
Posted by Grieve at 6:10 AM

See, while I dislike the aesthetics and inconvenience to our fellow drivers and parking space seekers and the placement of privately owned and operated machinery on PUBLIC grounds....*end rant, I would not put Agatha's (my dog's) poop on it and vandalize it any other way.
IN FACT, the more people I see on the bikes, happily pedaling away...the less irked I get. Their happiness makes me in turn, happy.
And that's a good thing.

I am not a fan of Citibank, but it is ridiculous to vandalize these bike docks. Protest all you want, but find a more mature and productive way to do it.

What effective, convincing, rebellion. Photocopying the conservative, Murdoch-run, gossip rag the New York Post. This is more a sign that the neighborhood's in trouble than a bike share.

confident that i know who is putting the signs up as they are appearing inside my building on 13th street.

not sure about the poop and tires though. i doubt this person would go that far.

Vandelism is wrong. And it makes the neighborhood look bad.

nothing new here...every bicycle/vending machine left out 24/7 in the east village gets vandalize, the citibike program will be no exception.

I don't think the specifics of the vandalism suggest random acts of vandalism but rather a concerted effort by someone who doesn't like this particular station.

I live on the block and if I see it happening I will call 911 and follow the jerk until confronted by police and hopefully arrested.

I am also going to let management at Percy's and Heather's know what is happening - they have cameras..

Great, now I know why I couldn't get a bike from this station this morning, even though it was full. I wasn't the only person trying to get one, either. My husband noticed the front tire on the bike I tried for was flat, as well. I bike to work, and Citibike has been a great supplement for my own bike on days where I can only make one-way trips. This station is my back-up, since the one at 14th and B is often empty (because people, you know, actually seem to LIKE this program after all). It's really disheartening to know that people are so against this to the point that they would vandalize the station so it doesn't work for regular, non-WOOing members of the community who want to ride. Yes, the branding is ridiculous and over-the-top. But you know what? I love having a cheap, healthy, eco-friendly way to get around, and there are a lot of people who feel the same way, of all ages and stripes. And hey, I'm one less body on the sardine can on wheels that is the L in the morning! These vandals need to find something that's actually worth protesting...

Selling hot citibikes in TSP for $40. Just don't dock it.

Someone commented here that the people of Avenue C would trash the bikes/racks. So far, everything's fine over there. It turns out that it's the entitled people of Avenue A who are doing it.

Don't be too positive and rational. You're dangerously close to getting accused of being a citi-shill.

agranddayout, I do believe that your fellow drivers are placing "privately owned and operated machinery on PUBLIC grounds" as well.

I live on the block and a few weeks ago I saw a woman in her (70s?) taping up the NY Post clippings. Don't know if she is the one vandalizing the bikes - but if I witness anything in the future I will be both taking photos and calling the police.

Wow, I hope this person gets caught and has to pay for their childish behavior.

"I live on the block and if I see it happening I will call 911 and follow the jerk until confronted by police and hopefully arrested."

Why would you want to get arrested for following someone?

And posting an anti-CitiBike flyer is now considered vandalism? In the East Village? Someone forgot the Tompkins Square riot and the real vandalism of days past.

Read the post again - multiple bikes and multiple occasions of punctured tires at the docking stations is intentional vandalism. Smearing shit on the docks and damaging the locking mechanism is also vandalism. No one is suggested the posting of an article from the NY Post is vandalism though it does show how lame the arguments are against bike share.

The tire are specially puncture resistant and helium filled

Agree with everything Em says! I've been using the bikes and getting really attached to having this option to get around.

For some time now, myself and concern naborhood neighbors noticed these blue citi bikes on the park foors throught our blocks.sometimes hidden in the corner in the blg lobbys or even in the basements.we noticed kids, day or nite pulling&yanking these blue citi bike rite out of their dock-station on the corner of 240 madison st. L.e.s accross the street from governieer hospital.now what puzzles us is that, a few feet away from these bikes are video cameras and we see nothing happens..what are you(the citi)going to do?
Concern member of the community. .THANK you