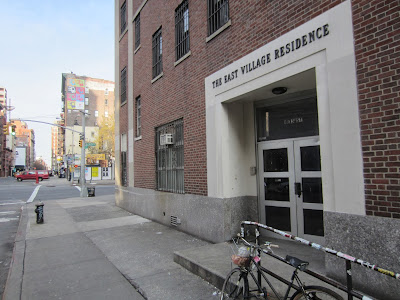 Several weeks ago, we spotted permits on file with the city to demolish the interior of the Salvation Army's former East Village Residence on the Bowery at East Third Street.

We thought, perhaps, this meant that the 3-story building was in for a gut renovation.

There are new permits now on file to demolish the whole building.

There's no word on what's next here from the privately held real estate firm who owns the space.

The shelter closed in August 2008.

Permits filed to demolish former Salvation Army residence on the Bowery
Posted by Grieve at 5:30 AM

Plans are calling from a luxury residential building from Urban Muse with ground floor retail and second floor offices.

looks like the entire Bowery is doomed to be a tourist and hipster hell hole for years to come. How do we contain it to that once fascination working and famously "non working" boulevard. Will we be asked to give more and more of our city's past and future to the gods of tourism?

BooooooooO! I was inside that building once for work; it's built like a brick shithouse. They could have done something good with this. What a waste!