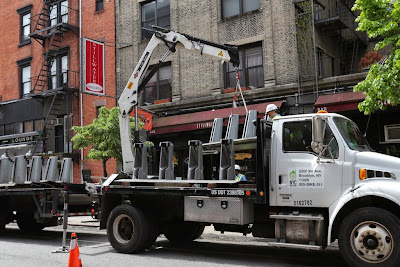 Crews this morning removed the Citi Bike docking station on East Fourth Street just west of Second Avenue. This is temporary, per EVG contributor Derek Berg, who took these photos... 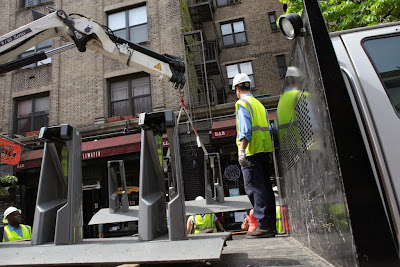 Apparently East Fourth Street here between Second Avenue and the Bowery will be resurfaced sometime soon ... (though we didn't spot it scheduled yet on the DOT website...) will be getting a street mural courtesy of DOT Art and the Fourth Arts Block.

Here's more about the program:

In collaboration with New York Cares and the DOT Bike Share Program, DOT Art beautifies asphalt around Citi Bike stations with colorful designs. … The first project took place in August 2013 at the Franklin Street station between West Broadway and Varick Street in Manhattan. 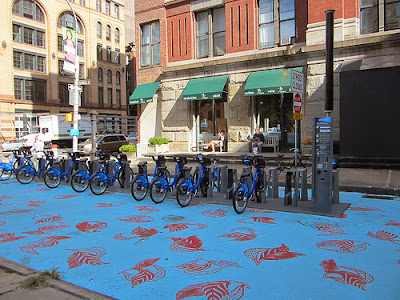 Later today, Derek spotted someone putting down an undercoat… 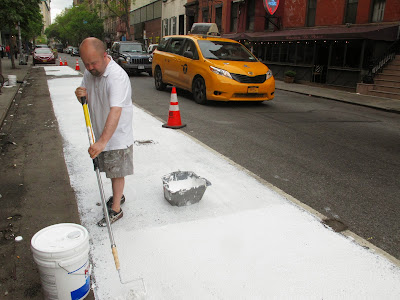 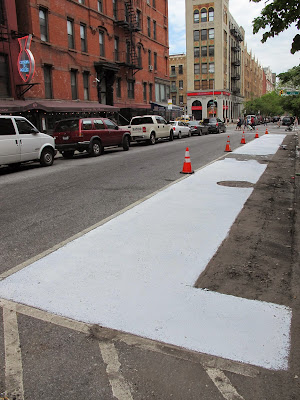 And if you are looking to either get or return a Citi Bike... Second Avenue and East Second Street might be a good option.
Posted by Grieve at 12:31 PM

Permanently move them to the bottom of the Hudson.

I hear there's a new discovery of a metal eating plant, seems like food for a while?

Q: What do you call 1 citi bike docking station at the bottom of the Hudson?
A: A good start

Please stop trying to make our streets look like a child's bedroom from Ikea.

For THIS we have money?! And I agree that it looks like a bad rug from Ikea.

Hell, the street has been beautified just by removing that crappy bike stand, no need to do anything else.

They should have at the least swept up all the dirt and grime left from the stations before starting their mural....