Jimmy McMillan's legal battle against his landlord continues on 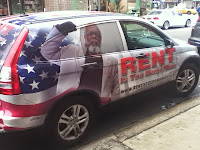 The Voice has an update on the ongoing legal wrangling between Jimmy McMillan and his landlord, Lisco Holdings LLC.

After a 4-year legal fight, the "Rent is Too Damn High" party founder was set to be evicted on Feb. 5 from his rent-stabilized apartment of 38 years on St. Mark's Place. However, a court gave McMillan a reprieve.

Now as the Voice notes, McMillan bought himself more time thanks to the intervention of the city's Adult Protective Services program.

McMillan, a decorated Vietnam War veteran, cites his war-related post-traumatic stress disorder and other medical issues — including memory loss and high blood pressure — as reasons for seeking help from APS. The stress of the long legal battle with his landlord and the looming threat of eviction brought back old battle wounds, he says. "I almost had a nervous breakdown," McMillan, 68, tells the Voice. He even called the suicide hotline.

According to his attorney, John DeMaio, McMillan turned to APS after "all other legal remedies had been exhausted." A "renowned" doctor, whose name DeMaio did not disclose, examined McMillan and recommended the court's intervention in delaying the eviction.

McMillan, whose family has occupied the apartment since 1977, claims the eviction is "racist" because he and his family are the only African Americans living in the building. Lisco Holdings purchased the building from its previous owners in 2006.

The landlord contends that the apartment is not McMillan's primary residence.

The case is not under further review until April 7, according to the Voice.

I dont recall him having all these problems when he was getting publicity and running for office. And he goes to the race card. Is he going to get Al Sharpton involved next? This is sad and pathetic and ridiculous. Claiming to have called a suicide hotline is clever. I wonder who thought of that. So I guess if I violate my lease and find some hack doctor I can keep my apt? Cool.

Whose side are you on here? A vet or a creep landlord?

Mayor Sharpton is going to hear about this.

Don't joke about the Veterans Suicide Hotline you creep. Just look at the stats on Vets suicides they happen way too much. Too bad you don't have the guts to post your name on your comments you cowardly worm.

If I see one more post about a party or an art show glorifying the Lower East Side squatters at the Museum of Urban Reclaimed Space while all you MFers are sitting around not doing or saying anything about the eviction of Jimmy McMillan the Rent is Too High Vietnam Combat Vet from his apartment on St Marks place I am going to PUKE. Shame on all of you who used Housing is a Human Right and all that BS to get legal squat apartments to own or sell completely disgusting !!!

I have no dog in this fight, but just for the sake of understanding... is he paying his rent or not? What is the cause for eviction?

All these anonymous cowards posting crap. John Penley...I'm with you. 44 year resident of this once beautiful and caring neighborhood.

So now a landlord is a racist if he or she expects their black tenants to pay rent. Great!

From my understanding of this story, his landlord as with most landlords would love to get rid of long term renters so they can get rich short term renters instead. After some snooping the landlord discovered he was renting another place in Brooklyn which he claims he uses for his office. If you saw pictures of his apartment you would most likely believe this is true. I've had friends which had PI's hired by landlords sitting outside a building recording who goes in and out and use this information to evict tenants who they suspect have another (full time) residence. I believe this is what is happing here. However if you wish to use this story to discuss: race, vets and suicide don't let the truth get in the way.

John what are you doing to help?

The landlord REFUSED to accept his rent payments, resulting in a HUGE outstanding rent balance. This is part of the scheme they use to get rid of tenants.

The man LIVES there and has an office elsewhere. SO FUCKING WHAT if he spends x amount of time in one place and x amount of time in another? Does he have to check in at St. Marx daily so that he's considered a full-time tenant there? He's not anyone's prisoner by virtue of his being a renter!!

Other than the landlord/real estate industry trolls posting here as COWARDLY "AnonymASS" commenters, who the fuck would be taking the landlord's side over Mr. McMillan????

Just because a landlord doesn't accept your rent check it doesn't mean that you can go buy and shoes with it, you put that shit in escrow.

Wow.. "The Race Card" wow...this landlord change the locks to the building and refused to give me a KEY even after NYC Housing Court Judge Gary F. Morton ORDERED his to do so. I had know idea Non-primary residence would be used to evict me. I was more focus on injustice in the Housing Court by Judges. I didn't want my family to be exposed to the displayed racial hate of one. the fact of the matter is who do you think you are to lock me out of building i lease then turn around to evict me saying i don't live there. is he for real. (Hope all understand)