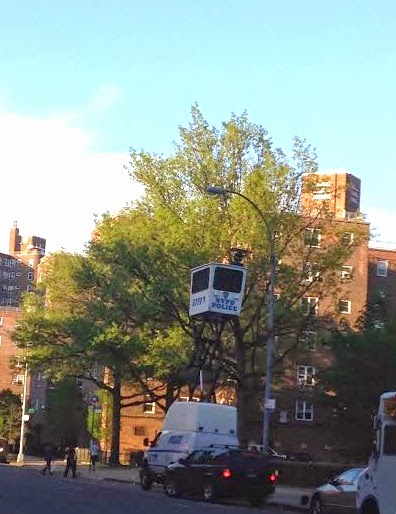 Said one this morning: "Woke up to 5 loud gun shots last night outside my apartment on Ave D and 8th Street. Then a police siren about 5 minutes later."

Per another resident later today:

"Altercation around midnight on D between 8th Street and 9th Street among young males escalated and one party came back and fired shots. No one hit. Car on D took some shots and [the former] Joselito's took one in the window. Multiple 911 calls placed last night and half a dozen detectives plus a new surveillance tower van out there now."

Why the heck don't they prevent guns from going into the houses on Avenue D? This is an ongoing problem.
There should be security cameras and security guards manning turnstiles in each of these buildings. Anyone caught with a gun would be kicked out permanently and not allowed back in to any of the buildings there.

The vast majority of people living in the projects are decent people living their lives. Day to day is pretty humdrum. It's rougher around the edges, and there are high levels of socioeconomic disadvantage, but most people are normal decent people.

These decent people are also those who bear the cost of sporadic violence such as this, both in the risk of catching a stray and in the inconvenience of dealing with the police response to something they have nothing to do with in the first place.

Turnstiles and metal detectors are a tempting way to go, but really not the answer for a few reasons.

First, turstiles in projects will not prevent gun violence. What's to stop a perp from stashing a weapon a block away in a private residence?

Second, if you believe that we should install security in buildings surrounding areas where crime occurs, are we going to implement it in all areas surrounding shootings? Would you be as enthusiastic if your building were selected because gunshots were fired nearby? It is unfair for innocent bystanders to pay for the actions of a few, especially when the measures implemented won't do anything except for pacify those who want to see a quick and visible response.

I hate this kind of violence. I have lived across the street from the projects for 4 years. The restaurant below my apartment was hit last night. I am interested in thinking about how to deal with this issue.

Another concern I have is that violent perps are rightfully locked up and taken off the streets, only to return 5 years later hardened by the prison system and very likely to commit more crimes. As many perps are being released as locked up, so although law enforcement is the right short term response, there is a steady stream of perps returning to rough neighborhoods. Law enforcement alone is not enough. An equal amount of relaunches should be invested in understanding and altering underlying causes of urban violence.

Finally, I fail to understand the police response to this type of incident. There is a surveillance camera van, 5 police cruisers, and 12 officers on the block tonight. They will probably stay for a week or so, and then things will be back to normal. What does this do for crime prevention if it is not a sustained effort? Is it a show of force to criminal elements in the area? An effort to make the community feel safer? Seems like it will do about zero to impact crime in the area over any time period longer than the week they stay.

Some of the projects need to be taken down, now they are from 14th Street down to the Brooklyn Bridge built with the failed Urban Renewal model of super blocks and Towers in the Park. They have created frozen economic zones with gang crime requiring a large housing police presence to keep the lid on.The East Village and LES need more moderate income housing today not low income housing.Better use of the land and housing can be built on some of these sites opening the local economy and reducing the need of policing by ending super blocks restoring the grid streets and getting a economic mix of residents.

Nonsense. It's not the superblocks or the Towers, it's the people in them.

I continue to predict the Alphabet City projects will be removed to make way for luxury housing, the views are just too good to be wasted on the volk. I say within 10 years.

WTF is that? A police tree house?

Super Blocks and Towers in the Park are awful Urban Planning coupled to poverty it's a disaster. City works best as a grid of blocks as it was zoned after the Civil War. The Post WW2 Urban projects destroyed neighborhoods not just in monolithic housing model but look at the BQE.Not many Urban Architects today would repeat those mistakes.

So everyone there should be punished? You want to live like that?

Didn't Mayor DeBlasio just push NYCHA to complete putting cameras (for which they have had funds for years) into all NYCHA housing? http://www.nydailynews.com/news/politics/nycha-adds-security-cameras-de-blasio-push-officials-article-1.2160416
In answer to your question why can't they keep guns out of Ave D is because the landlord is the City of New York/NYCHA which up to just recently seemingly ok with the deaths of tenants due to gun violence.

I live on Ave, D and 3rd street - pretty safe - our block is mainly Spanish and they keep the skum off the block. The violence has erupted becasue of our patsy mayor and his removal of stop and frisk - big mistake. Crime is way up because of this. The statistics prove this.