Report: Bystander shot in foot during argument on Avenue D 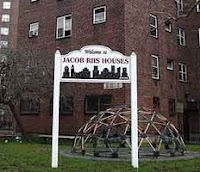 A woman standing outside the Riis Houses last night around 11 was accidentally shot in the foot when a fight broke out nearby, according to published reports.

A witness told DNAinfo that she heard five shots at 178 Avenue D near East 12th Street.

"Gunshots are nothing new around here, but it's getting old, getting tiring. You feel like a hostage in your own neighborhood," the witness said.

The victim, 53, was taken to Bellevue Hospital ... where she was listed in stable condition. According to the Daily News, the woman was hit in her left foot and the bullet grazed across her right foot. It was not clear if she knew the men arguing. The shooter remained at large.
Posted by Grieve at 1:00 PM

Looks like the police tower in TSP will be on the move to fighting and preventing actual crimes.

Good thing an NYU student wasn't shot in the foot, or the city would have decided to demolish all the building on Ave D and build "safe" dorms there.

If an NYU student needs to get shot for them to tear down the projects, I'll enroll today and volunteer my left foot.

Good thing it wasn't a NYU student that did the shooting, or this post would have 60 comments.

I wouldn't be surprised if NYU segued to Ave D soon. That institution is slowly taking over the city. They pretty much own everything and everyone from 14th and under. And yes, the stupid, insidious watchtower should perhaps be used elsewhere. What is happening to our beloved city? Is this a joke of some sort?

There's often very little comments when there's a story about any kind of violence (shootings or otherwise) when it pertains to NYCHA (now if someone hangs on a tree and breaks a branch...watch out...outrage galore).

Ahhhh the Good Ole LES returns just as I remember it.....

It never left- just like the old NY never fully left. Decriminalize public drinling, pissing, jumping turnstiles, being in parks overnight it will come back to life soon.

Decriminalizing something is not the same as legalizing it.

But who is kidding who, the "bad old 80s" shtick is just a dog whistle argument for racial profiling.

How do you get accidentally shot when your an innocent bystander?
always downplaying crime in the hood. she was shot and popo is doing a great job at leaving people at large.... good thing they moved the tower to the park to fight the homeless
SMH