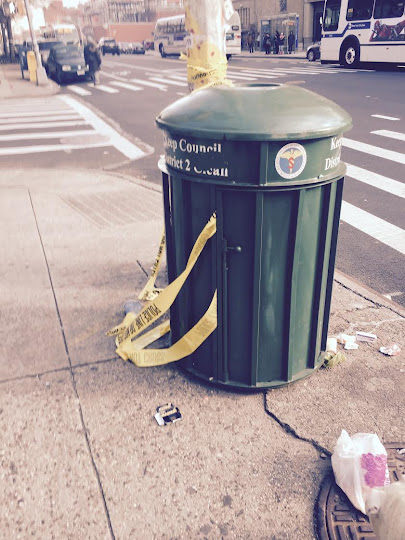 Just after midnight on Thursday, an EVG reader told us that there were three shots fired in front of 193 Avenue C at East 12th Street. The NYPD, the reader said, had taped off the scene... and recovered spent 9mm shell casings.

The Post today has more information in its Daily Blotter. According to police officials, a 23-year-old man had been shot in the left leg. He was spotted trying to leave the scene in a cab. "Cops said the man was uncooperative and refused to give them a description of the suspect."

The man was treated at Bellevue for non-life-threatening injuries.
Posted by Grieve at 10:55 AM

And to think this used to be such a nice, safe neighborhood.

The major news organizations won't mention this story since the victim was not a (blond) young woman.

Probably trying to take a cab since the cab would be $15 and an ambulance will be well north of $1500.

If I'm ever in an accident and conscious and able to walk, there's no way I'm getting in an ambulance either - even though I have insurance. They are an unbelievable scam

There's a price surge with Uber for those clients with gunshot wound.

Could have had a warrant out for him or may have been undocumented...

Two separate life threatening emergency situations - I've had doctors put me into a cab to a hospital ER instead of calling an ambulance. Both times I was fully insured. Not so unusual I'd say.

@7:51 PM I believe that Uber calls it Surgery Pricing.

Skywatch goes up, quality of life and property values go down