Pourt has closed on Cooper Square 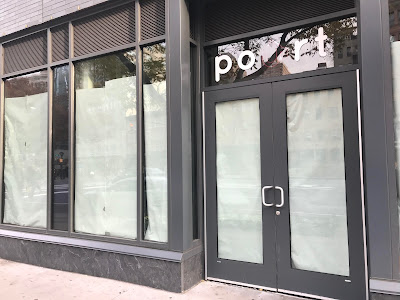 Pourt, the cafe-work space combo at 35 Cooper Square, shut down after service on Friday.

There's a message on the bottom of the Pourt website noting that they "are unfortunately no longer operating. Thank you to all of our customers." 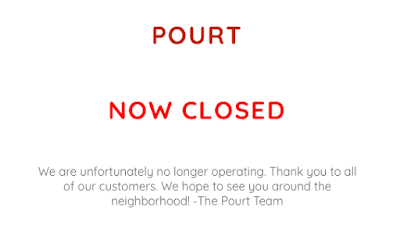 It seemed like a good idea on paper: a mixture of coffeehouse and workspace. People could rent a desk with speedy fiber optics by the hour ($7) and order bottomless coffee ($2.99). There was also access to printers, phone chargers, Skype facilities, etc., as well as a larger conference room for small groups.

The New York Business Journal wrote about the space back in March:

Pourt is striving to create a new hybrid, a mixture of coffeehouse and workspace, emphasizing short-term stays. Whether there are enough freelancers and small businesses that can pay those fees is yet to be determined.

Founders Matt Tervooren, 28, and 27-year-old Mike Kruszewski, lived in the East Village (Tervooren recently moved to Williamsburg) and met as economics majors at the University of Michigan. When they freelanced, they were “consistently frustrated by the lack of good Wifi, lack of available seating, or having the barista frowning at you if you don’t order more food,” Tervooren noted.

Pourt, he said, “combines the two concepts, a coffee shop with a comfortable work space.” And what differentiates Pourt from other co-working spaces such as WeWork and Regus is customers “don’t have to make long-term commitments. If you’re looking for a permanent office, we’re not right,” he admitted.

So what happened? One local who frequented the space offered this analysis:

Their rent was very high and they had a lot of square footage. They took so much space because they originally thought they could have space in the back where people would pay to work during the day. Their rent required that the work space generate substantial revenue. But nobody wanted to pay $10+/hour to work in the back when there are so many other options nearby. So they tried a bunch of other business models over the past year, trying to figure out how to generate enough revenue to pay crazy East Village rents on a large space that a coffee shop model alone couldn’t support. They were nice guys and worked hard ... it’s a shame.

Pourt opened back in January in the base of the Marymount Manhattan College dormitory here at Sixth Street.

The owners were unsuccessful in their bid for a full liquor license in July.

God forbid anyone work from home.

Nobody knows how to make coffee at home.

shocked...
hard working (one site) owners
solid plan ( not just a coffee spot--and not marketed as that)
better than average food
great reviews
maybe
just the wrong location (although i thought it was)
not sure ANYTHING is viable in the east village anymore.....
ps really curious of the future of space----WEST side of AVENUE A (12/11ST)
pps more curious of the future of space adjacent to TARGET (14ST)
PREDICTION----nothing will survive!!!

It’s the curse of the Bowery, this is a dead zone for most unless you’re McSorleys, a Japanese beauty salon or an Asian bakery. Being “Strategically located” near all those dorms means nothing—college students aren't going to pay a dime to study, they’re already paying enough in tuition, and they can just camp out at Starbucks and The Bean all day. The reason why office sharing spots like WeWork succeed is that commercial rents are sky high and only well-funded startups can afford a real office. Alt.coffee beat these guys to the market by about 20 years. Back in the 90s. people basically used the couches and the back room of Al.coffee as an office, got fast wifi and good coffee at a cheap price, and they didn't need a liquor license to be successful either. I still miss their coffee and overstuffed couches. Afbp is right, New York is making it too hard to survive.

That's too bad. Many of us cannot work from home due to roommates or just the awkwardness of having clients in a shitty apartment. It's nice to meet with clients in a professional setting and Starbucks does not count. I supported this idea and am sorry to see it fail. There are many excuses to make, but when it comes down to it, the rent really is too damn high.

Pourt also had a beer/wine license. They came to CB3 in July seeking an upgrade to a full liquor license, but the CB turned them down.

You can stay at Starbucks all day for $2.34. Why would you pay anymore? Bad business model. Maybe in Kansas. Not NYC, ToTo.

I am a freelancer, and I work at home. I can't afford to pay $7 a hour/plus coffee and food to sit somewhere else and work. It's just too expensive for most freelancers. Also, why would I pay the $7 an hour fee for the desk/WiFi when I can go to a local cafe and use the WiFi for free when I really want to get out of the apartment?

This is a bummer. Great work space. I paid the extra for the desks a couple times, but it was hard to see people sitting on the other side of the glass paying nothing and still justify it to yourself.

I have no need for this work space as I spend thousands per month on office rent. However, I do walk by the space several times a day and noted several things:

1. The name itself indicates coffee (or more so, tea) and nothing about a work space.

2. The signage/logo (though probably limited in size and positioning by agreement with the building owner) of only a coffee mug gave no hint this was a work space.

3. Signage on the window eventually brought attention to breakfast, lunch and dinner with little obvious mention of a work space. Written in white lettering, it really didn't do the job.

4. I was taught years ago that buyers walking by a trade show booth had 10 seconds to make not of your wares. Though somewhat wider than a 10' booth front, this storefront did not catch the attention needed to bring in workers. Perhaps a life size photo wall mural would have indicted the purpose of the business and not taken away from necessary storage, etc. for the food concession.

As their food offerings grew, the emphasis on the work space lessened and there was little to bring attention to this part of the business. Customers with laptops sitting at the stool seating along the window certainly made it look like another cafe, not a rental work space at all.

I was taught many years ago that a seller only has 10 seconds to catch the attention of a buyer walking past a 10' booth in a trade show. Though somewhat wider, this store front is much the same situation: pedestrians are paying little attention to storefront windows (especially since this between the hotel and a long empty space) and can pass by time and again without taking notice of this business. They lost the opportunity to catch the attention of the passerby.

Where else were they advertising? Most of the people walking up this portion of 3rd Ave are either hotel guests from the stretch near and above Houston St or a few students from Cooper Union. Although a by-the-hour work space may be a viable need in the EV, if the owners didn't make a very concerted effort to spread the word further east, this was not a business for this location.