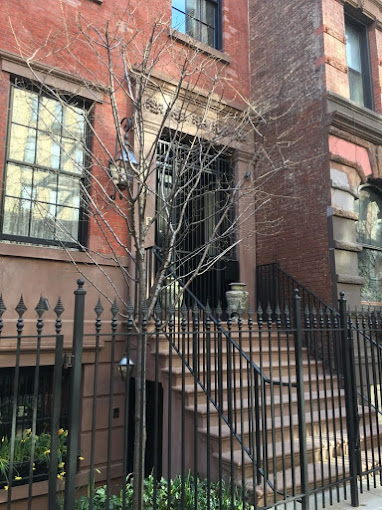 The single-family townhouse at 64 E. Seventh St. has sold after nearly a year on the market.

The Real Deal noted the sale last week for the home between First Avenue and Second Avenue. Per TRD, an entity tied to William N. Joy — principal of a Florida-based investment firm Water Street Capital Inc. — paid $15.75 million for the property, which had an original ask of $18 million.

According to Streeteasy, No. 64 has five fireplaces, terraces off of the dining room and master bedroom, and rooftop garden with — why not? — a pizza oven and basketball hoop.

The sellers were two trusts and Lisa J. Fox.

The building received a gut renovation in 2010 that saw the removal of its longtime storefront.

Jeremiah Moss explored the building's history in this post from 2010.

Past occupants of 64 E. Seventh St. include:
• The parsonage for St. Mark's Evangelical Lutheran Church
• The newspaper Russky Golos ("Russian Voice")
• The Les Deux Megots coffeehouse, whose readings featured Allen Ginsberg, Paul Blackburn and Carol Berge
• The Paradox, "said to be the world's first macrobiotic restaurant" where both Yoko Ono and folksinger Loudon Wainwright III worked
• Books 'N Things
• Tokio 7 (moved across the street)
Posted by Grieve at 4:12 AM

Book 'N Things moved out in the early '90s. I don't remember it. Anyone know what sort of books they sold? Did they ever have events?

Here's a wonderful remembrance of "the two cigar butts" from back in the 60s:

Books 'N Things sold high quality fiction, non-fiction, art books and collectibles such as vintage postcards. My friend Gertrude Briggs, a long time Village resident now deceased, ran that store. She moved there from another location on East 7th Street when the rent was raised. Before that, she and her late husband Harold Briggs sold books on 4th Avenue when it was "booksellers row." No there were no events there that I can recall.

Mpstlynpoetry and literature. Too small forevents. It was my grandparents'.