A Panera To-Go is opening on University Place 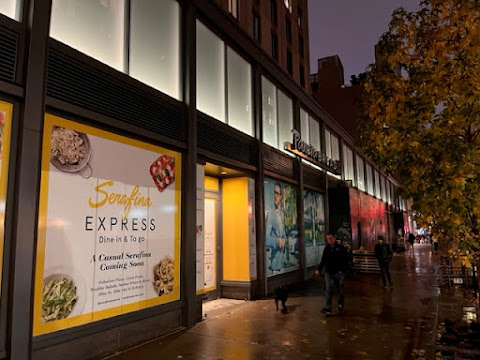 Signage went up yesterday for a Panera To-Go outpost on University Place between 12th Street and 13th Street. (Thanks to EVG reader Laura for the photo and tip!)
The to-go space differs from the other Panera locations, like the one that closed on Union Square East this past August.
Panera announced the new concept last month. According to Nation's Restaurant News, these smaller café formats "lean into off-premises dining."

The second store format is entirely new, will be 40% smaller than the average Panera café at 2,000 square feet and will be designed toward to go-customers with dedicated shelves for rapid pickup, a digital menu, tracking screen technology with detailed order statuses, and very limited seating.

Panera To-Go joins a coming-soon Serafina Express next door... in the building that replaced the old Bowlmor Lanes (RIP 2014).
Posted by Grieve at 5:00 AM

IMO, University Place has been disfigured beyond recognition.

It used to be very charming and very "village-y" in its nature, but all the new construction has made it into a glassy corridor that feels sterile, off-putting and anonymous. It's a shame.

It's not New York anymore; now it feels like you could be *anywhere*.

Agreed. It is so disconcerting to walk by such ugly glass boxes wedged into what was once such a charming street. The blocks closest to 14th street always seem so trashed too.

Soup bread bowl all day everyday. But it's better than a weed store.

Given the ridiculous rents commercial landlords are demanding, goodbye small and unique businesses that give the neighborhood character.