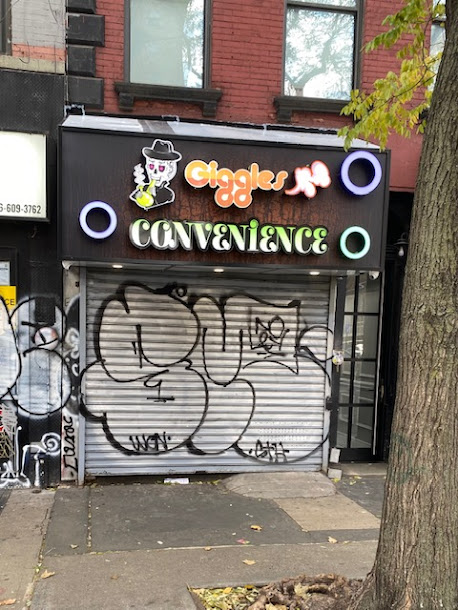 Photos by Steven
Another day, another few smoke shops setting up for business in the East Village.
Up top, we have Giggles Convenience (so many smoke shops, so few names left!), coming sooner than you think on First Avenue, just below Fourth Street. Signage includes a skeleton in a hat smoking from a bong.
And on Ninth Street between First Avenue and Second Avenue, Pride Smokes is offering "foreign snacks" and various items you can find in the other few dozen shops that have debuted of late... 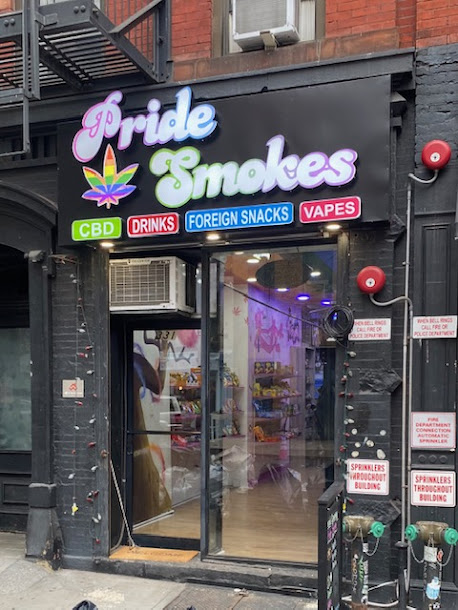 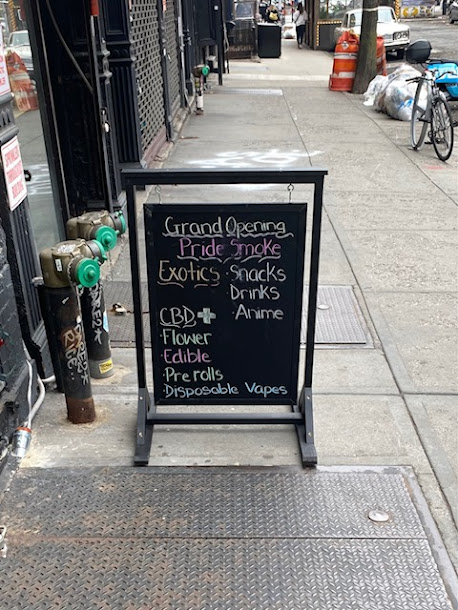 Late last month, 28 individuals and businesses and eight nonprofits were designated Conditional Adult-Use Retail Dispensary (CAURD) licenses by the state Office of Cannabis Management ... for a total of 36 licenses statewide, per published reports.
The Times had a piece last week titled: "How New York City Became a Free-for-All of Unlicensed Weed."
Excerpt!

The sleek dispensaries and tacky bodegas are part of an explosion of unlicensed cannabis shops that have opened in New York over the past year as part of a rush to cash in on the state's legalization of cannabis. Now on the eve of the launch of the state's legal market, the authorities face growing pressure to address the shops, which have created confusion among everyone from tourists to police officers.

The Police Department explained in an email to The New York Times that, in its view, the legalization law does not give officers the authority to make seizures or arrests when they see cannabis displayed or to shut down unlicensed shops. "The law only provides an enforcement mechanism if an actual sale is observed," its public-information office said.

As the Post noted, the study also found that there are "likely tens of thousands of illicit cannabis businesses currently out of bodegas, smoke shops, or other retail locations" that are licensed to sell other products.
Posted by Grieve at 8:10 AM

Isn’t bad enough just how expensive New York keeps getting. Now it has to be stupid with also horrible signage.

Is the state going to do anything between the licensed and unlicensed sellers? It would seem hard to enforce. What is the major difference of the two?

every single one of these sales has not been taxed a single cent and the city faces a massive deficit next year.

It's probably going to take an outbreak of e.coli or salmonella before anything is seriously addressed. As usual, let's be reactive instead of proactive.

Does anyone know where there is a Quaalude convenience shop? Just asking for a friend

Pretty confident half of these new shops will be out of business within 36 months.

It's New York City, no one is going to do anything and no one will enforce the laws. Foreign Snacks? Seriously ???

If the state hadn't wasted so much time virtue signaling by trying to prevent the "wrong people" from creating tax revenue, this situation could have been avoided. So now instead we get no tax revenue. Great work everyone.

I love watching the destruction of society, one lazy illegality at a time.

History will remember America as a place of easy access to illegal guns and the resultant random shootings; equally easy access to any kind of illegal drug; people who cheerfully & deliberately celebrate their *freedom* by frying their brains on various drugs (some of them while also being addicted to TikTok, which I'm convinced causes brain damage all by itself).

All that, plus the "joy" of EVERYONE being forced to breathe vile skunk-smoke when walking down the street daily, and the public display of people who celebrate getting themselves blackout drunk, etc. Whatta civilization, eh?!

The plague of these places reminds me of when cellphone stores blanketed the city.

9th Street used to be such a wonderful block of creative designers and entrepreneurs - a real example of East Village individuality. Here it is today…an example of greed and sameism,

The dark web has come to the neighborhood.

These smoke shops are illegal.

If you see a smoke shop, report it to the New York State Office of Cannabis Management at Enforcement@ocm.ny.gov
and “cc” Community Board 3 by using this form:
https://www.nyc.gov/site/manhattancb3/about/service-complaint-form.page

When notifying CB3, please include the name of the smoke shop as well as where it is located.

Also, the crack and meth pipes prominently displayed in some of the shops' windows must not go unremarked upon.

But we can't close the shops because they provide "crucial employment opportunities" says the representation for the newest scourge plaguing our city.

Read what the NY Times found in the weed sold in unlicensed shops.

Correct. Just like Saint Marks Place between 2nd & 3rd avenues was the coolest block in the 1970’s. And look at it now. It is the most disgusting filthy block in the hood.

Ohhhh boy roll me up and smoke me when I die

Build it and they will come. If there was no demand for weed and other supplies there would be far fewer weed emporiums.

Makes me long for cupcakes and froyo joints

This is really kind of funny and sad too because when I first moved to the East Village in 85 all the stores below Ave. A were selling coke and dope and one buzz in storefront run by Jamaicans sold nickel and dime bags of pot.

Ahh 3:57 great song had to burn one and play that

Don’t do this, don’t be a narc

If you trust your unlicensed seller then you get the same bud for 40 an 8th that these places sell for 60.

There's an office of cannabis management forum Wednesday 12/14 from 6-8 at the les girls club 402 east 8th . Harvey Epstein will be there. Let's be there and be vocal!

A cannabis shop is reportedly having its grand opening on East 7th Street between 2nd and 3rd Avenues. A church, two high schools, etc. are located across the street from this cannabis shop. A sign bearing the name of the previous store hangs outside the new cannabis shop (Bulb Concept Lighting Supplies).

A smoke shop replacing Bulb Concept Lighting is sad. What a devaluation to the neighborhood.

Now there is a drug we never should have banned. Let’s all vote for microdosing mushrooms. That would chill everyone out.