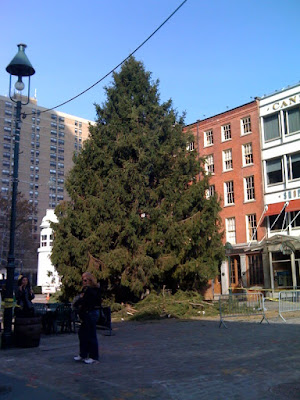 The tree went up over the weekend...And, on a personal note: I'm just not ready for this!
Posted by Grieve at 12:36 PM 6 comments:

The Christmas tree in Tompkins Square Park was last illuminated on Friday, Feb. 6. However, the strands of lights remained on the tree...Until yesterday, when a City crew came in and removed them. 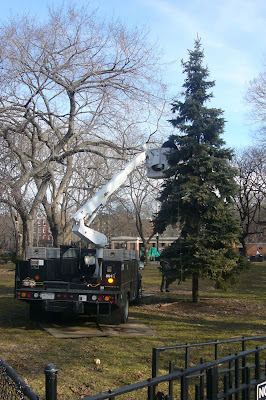 Posted by Grieve at 6:48 AM No comments:

On Saturday, the Christmas tree in Tompkins Square Park was turned off after nearly two months... 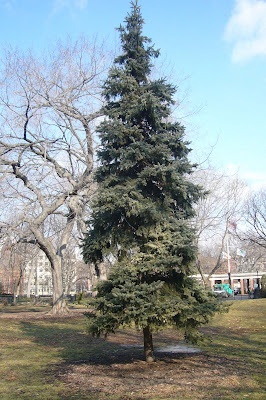 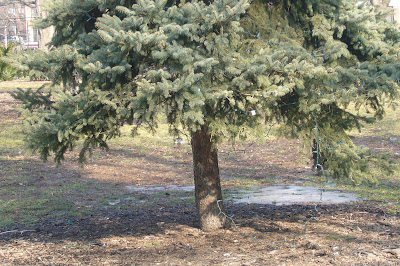 So maybe someone can plug it in for Valentine's Day.
Posted by Grieve at 6:33 AM No comments: 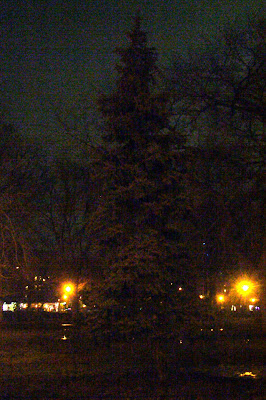 The tree lighting ceremony was Dec. 14...

Previously on EV Grieve:
By the way, the Christmas tree is still on in Tompkins Square Park
Posted by Grieve at 9:57 PM 2 comments:

By the way, the Christmas tree is still on in Tompkins Square Park 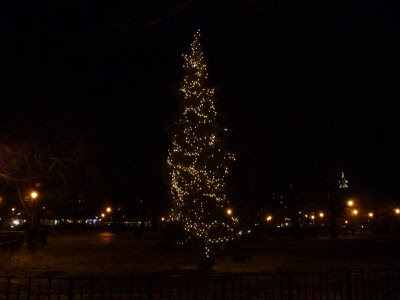 Does it seem odd to anyone else that the Christmas tree was still lit up as of last night in Tompkins Square Park? Maybe someone just forgot about it...? And it will be lit through the summer maybe?

Previously on EV Grieve:
An EV Grieve editorial: Time to turn off the lights this season on the Tompkins Square Park holiday tree
Posted by Grieve at 5:42 AM 2 comments:

An EV Grieve editorial: Time to turn off the lights this season on the Tompkins Square Park holiday tree 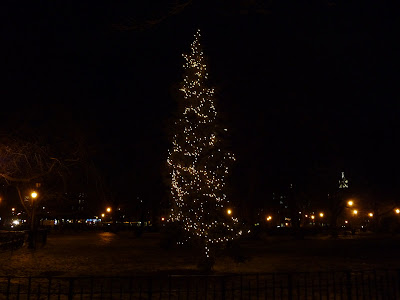 It was a fine-looking light job, as always. A lovely tree-lighting ceremony. The tree was still lit up as of last night. It's Jan. 14. Having it on now is just, well, depressing. (Holiday lights in a bar? Different story!) Time to move on. Anyway, we just have one month until Valentine's Day!

[Updated: I'm a jackass...the lights are kept on for a reason. See the comments. Here's more on the Ukrainian holiday from the Web site of St. George's on East Seventh Street. My apologies. But they'd better be off tomorrow! Happy New Year!]
Posted by Grieve at 6:43 AM 3 comments:

Never saw this one coming....

"Merry Christmas Baby" by the Ramones.
Posted by Grieve at 5:00 PM No comments:

Email ThisBlogThis!Share to TwitterShare to FacebookShare to Pinterest
Labels: christmas in New York, holidays, the Ramones

'Tis the season for keeping ConEd in business: The holiday lights are up at Rolf's

One of my favorite NYC holiday traditions. The over-the-top holiday lights -- some 70,000 light bulbs in total -- and Victorian-era tchochkes went up at Rolf's last week. For the last month, a few members of the staff at the French-Bavarian eatery at 231 Third Ave. at 22nd Street have been putting up the decorations after hours...they'll be on display until the middle of January. The restaurant opened in 1958, and the lights apparently started going up a few years after that...(at times, it still feels like 1958 in here...). Anyway! The lights! 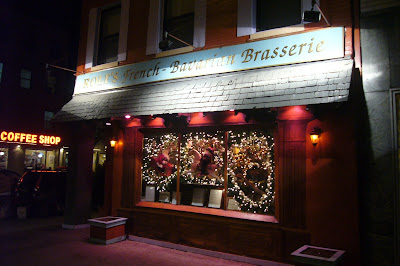 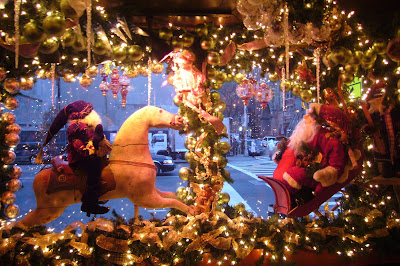 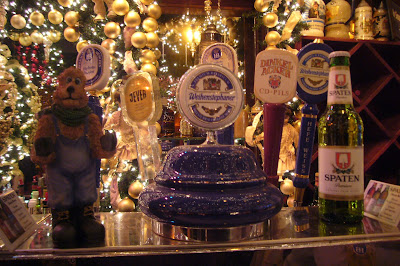 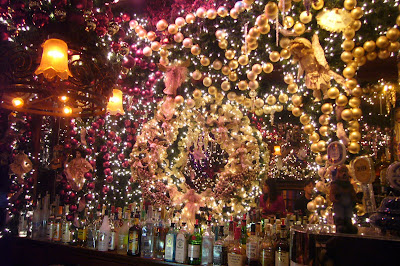 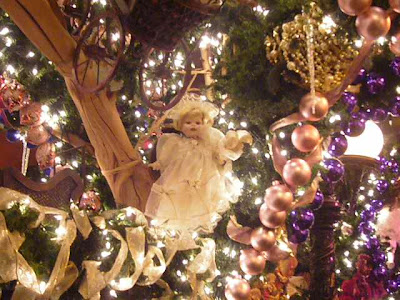 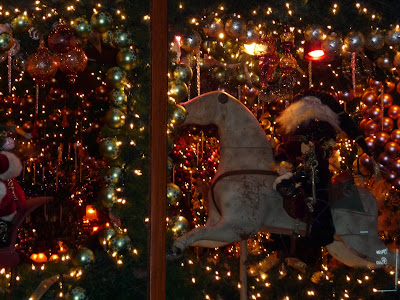 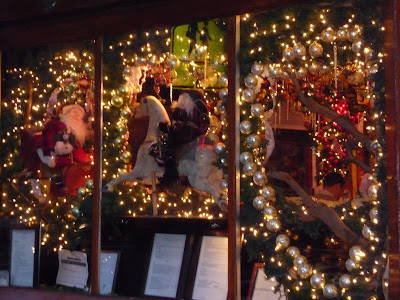 It gets horribly crowded at Rolf's during the holidays, of course...Just grab a seat at the bar (if you can during off-peak hours)...the food is too heavy for my tastes (hmmm, suckling pig), unless I'm trying to spike the LDL level in my bloodstream. In any event, if Rolf's is mobbed, Paddy Macguire's down the street -- between 19th and 20th -- is a decent alternative for drinks during the holidays. They have some lights as well -- and a much smaller carbon footprint. 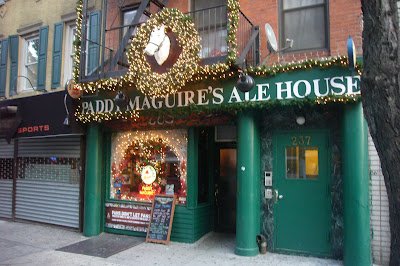 Not ready for any of this

The Holiday Market at Union Square was being set up yesterday... 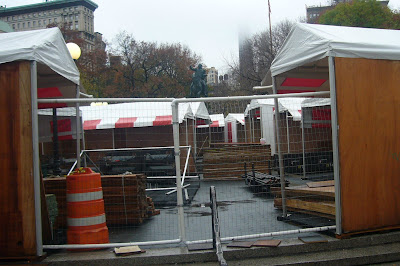 Duane Reade had their shit out in October. 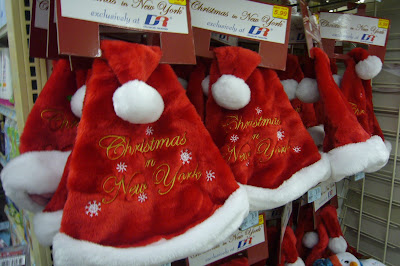 Food Emporium had their stuff up the day after Halloween. 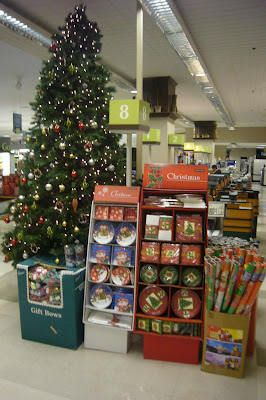 The holiday lights went up on 10th Street sometime this past week. 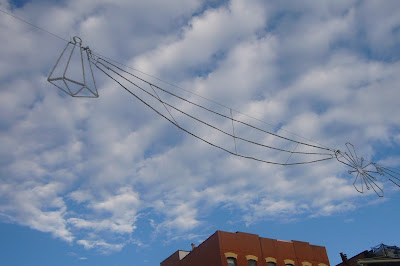 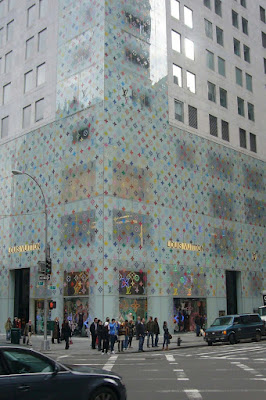 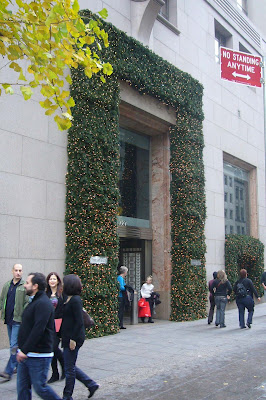 I'm still trying to enjoy my Labor Day.
Posted by Grieve at 10:34 AM 2 comments: 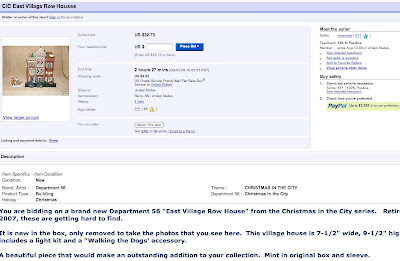 Perfect for the Winter Wonderland in the East Village display I'm creating in my living room this December!
Posted by Grieve at 10:54 AM No comments: