Time Out gives the Mosaic Man some love (a few days later...)

A few of us were curious why Time Out's current cover story on places to eat and drink and go to DBGB and the Cooper Square Hotel and recapture cool and stuff in the East Village didn't include any credit or mention of Jim "the Mosaic Man" Power. A photo of one of his iconic works is on the cover. One commenter even encouraged people to write a letter to the TONY editor. Give Jim his due.

Anyway, for whatever reasons -- perhaps this was already planned! -- a feature on Jim popped up on the TONY Web site yesterday afternoon. 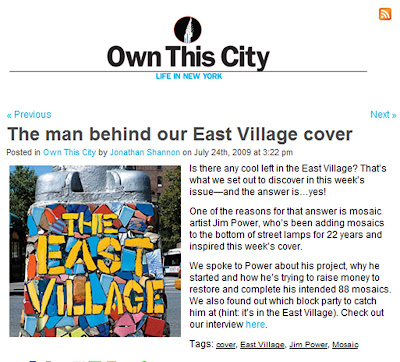 You probably recognize the image on our cover and homepage this week — and that was the point.

this is what i sent - not sure if anyone else wrote in, but no one wrote back from time out, then i saw the piece added online.

"Shame on you for not crediting Jim Powers for his legendary mosaic work that graced the cover of your recent issue. Give credit where credit is due. If you want to maintain the realness factor in the East Village, you can start by not ripping off the original scenesters and selling it straight to the gentrifiers while pocketing all the profit. Jim should not only be credited, but compensated."

Thanks, Glamma. I'm glad you did this. Good to see Jim get credit.