"The Perfect Crime" at Bullet Space 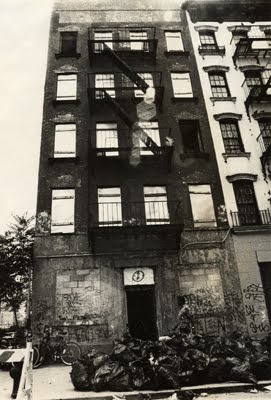 City Room checks in with a piece on "The Perfect Crime,” the exhibit that Andrew Castrucci organized at Bullet Space on East Third Street.

The show, up through this weekend and featuring more than 200 artists and 300 works, is part retrospective of the experience of squatting and part history of the building and the people it has housed, including both squatters and unknown inhabitants from previous centuries who left traces of their lives hidden behind walls or buried in the ground outside. Mr. Castrucci said he was motivated in part by a desire to document what had in some ways been a secret existence.

By many measures life is now less arduous, Mr. Castrucci said, but he still relishes the independence and freedom he and others found in the pre-gentrified days of the East Village, when it seemed for a while that the future could be written by anybody bold enough to act.

“We were a mixture of volunteers and dropouts from society” he said. “And I still haven’t figured out what category I was in.”

Jill wrote about it here.

The Villager profiled it here.

Previously on EV Grieve:
Bullet Space is the first of the former LES squats to take over ownership of building from city

[Photo of Bullet Space from 1986 by Sebastian Schroder via the Bullet Space site]
Posted by Grieve at 12:53 PM

thank you for this. i used to live down the block from here. i went to the exhibit and really enjoyed it.

Thanks, Glamma. Glad you liked it!