The Post has a follow-up on our Hells Angels bench story from yesterday (and they did credit EV Grieve in the story — thank you!). 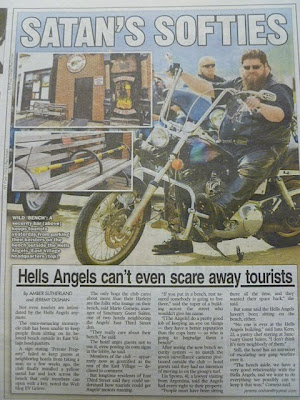 Here's the article, in part:

Not even tourists are intimidated by the Hells Angels anymore.
The once-menacing motorcycle club has been unable to keep people from sitting on its beloved bench outside its East Village headquarters.
A sign stating "Private Property" failed to keep guests at neighboring hotels from taking a seat, so a few weeks ago, the club finally installed a yellow metal bar and lock across the bench that only members can open with a key, noted the Web blog EV Grieve.
The only hogs the club cares about more than their Harleys are the folks who lounge on their bench, said Mario Cornejo, manager of Sanctuary Guest Suites, one of two hotels neighboring the Angels' East Third Street den.
"They really care about their bench," he said.
The hotel urges guests not to use it, even posting its own signs in the lobby, he said.
Members of the club — apparently now as gentrified as the rest of the East Village — declined to comment.

No word yet if the Angels are planning their next rally at 1211 Avenue of the Americas.
Posted by Grieve at 11:48 AM

The Angels need to install one of these benches instead:

good score--they actually credited you! they're getting better at that.

Jesus, back in the old days they'd beat the crap out of anyone who lingered for more than 2 seconds in front of their clubhouse. I remember one 4th of July when they threw a woman off the roof and exploded a barrel with M-80s and someone was either killed or were sent to an intensive care. The police came but then 1 hour later, they resumed with blowing up metal barrels. Now they can't even shoo away the tourists....

for fear of retaliation from the hell's angels for being labeled as gentrified softies(you didn't), the nyp credited you this time...

Fact is the post writer is just too stupid to know that he's done something stupid . People that do stupid things do still get hurt .

There's a rumor going around that Albert Maysles is going to do a documentary about this and call it, "Gimme Bench."

A LONG TIME AGO I PAUSED IN FRONT OF THEIR BUILDING, JUST TO LOOK, AND PITBULLS ON THEIR ROOF STARTED BARKING AT ME. I DO LOVE MY 'HOOD, THEN AND NOW.

I was walking down the block once and in front of the clubhouse were two massive Angels bookending some dorky-looking stringbean in a black leather jacket, having their photo taken. When I came abreast of them I realized the skinny dweeb was a French Hall's Angel - the disparity was hilarious, but I didn't laugh while I was in earshot.

I love how these bullies are celebrated. It's cool that they pick on people because they wear leather jackets? Please. My uncle was a biker and he was a great guy, always eager to help someone or share a kind word. Biker doesn't have to equal thug.

You can only coast on your reputation for so long. I mean when is the last time you heard about this club actually doing horrible things.

Maybe two years ago there was a story in the news about a woman who'd been drinking at the bar that was on the 1st Avenue corner, she somehow angered one of the Angels who were also in the place and they beat the shit out of her and threw her onto the sidewalk. She was hospitalized in pretty bad shape, and a few of the Angels were arrested, but I don't know what happened after that. That's recent enough that I'd still be a bit leery of pissing them off - they have a reputation to protect!

I'd like to point out that the bar is not locked at all - it's held up with zip ties.