Jimmy McMillan will run for NYC mayor in 2013 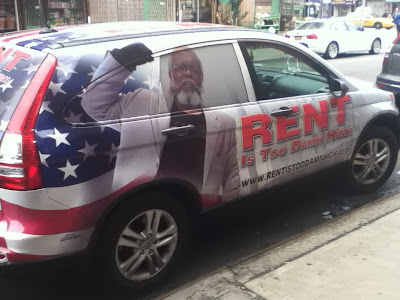 Catching up on some political news here. Yesterday, the Observer reported that Jimmy McMillan announced that he will run for NYC mayor in 2013. He made his announcement at Tammany Hall on Orchard Street, where he was performing a few musical numbers.

Mr. McMillan decided to launch his mayoral campaign at the concert ... after meeting two of the women who were performing in the show at a Dunkin’ Donuts in the Lefferts Garden section of Brooklyn. Dion McKenzie and Erika Buestami, who perform as Kowabunga Tyga, said they instantly recognized Mr. McMillan.

“We met Jimmy McMillan at Dunkin’ Donuts when Jimmy was doing his thing, campaigning and the rent is too damn high,” Ms. McKenzie said pointing towards her bandmate. “She just went up to him like, ‘Hey Jimmy, What’s up.”

He will be keeping with his Rent Is Too Damn High Party line. Before tossing his hat into the mayoral race, McMillan was running a presidential campaign as a Republican. He said that he will now support President Obama.
Posted by Grieve at 7:40 AM

whats his stance on soda sizes?

That they're too damn big?

He's got my vote.

Amazing. I think he has a really good chance!!!