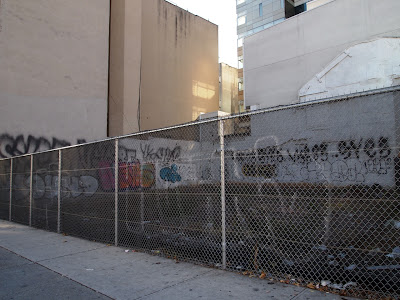 Nearly two years ago, the historic, circa-1825 building at 35 Cooper Square was quickly demolished.

As we first reported last Aug. 21, developer Arun Bhatia filed paperwork for a 9-story dorm for an unspecified school in this space.

The proposed plans called for a 9-story dormitory with 43 rooms ... plus retail on the ground floor. In total, the building would be nearly 35,000 square feet (at a height of 117 feet).

And that was that. The plans continued to be "pending" with the DOB.

Until this week, when subsequent paperwork filed with the DOB yesterday show a 13-story dorm in this space instead... 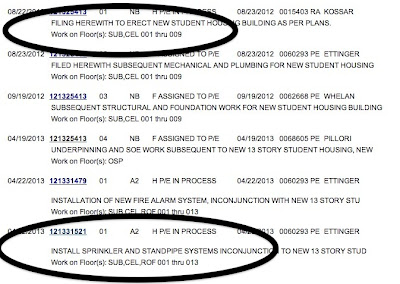 Perhaps if they wait a little longer they can get it up to 18 floors.

Here's what's coming to 35 Cooper Square: 9-story dormitory
Posted by Grieve at 6:30 AM

I wonder what the going bribe-per-floor rate is at the DOB these days.

There go the rest of the views out of any north windows in the Standard EV. This luxury hotel keeps getting less luxurious. Bummer for them.

Grandma had the best ever place in the EV. Of course, it didn't last. But hey, at least I have some memories. I feel sorry for all the people who wound up to be clueless. Cooper 35 FOR EVER.

...how many more dorm rooms do they really need at top-dollar rates? and how many upperclass/grad students are filling them, one may wonder!