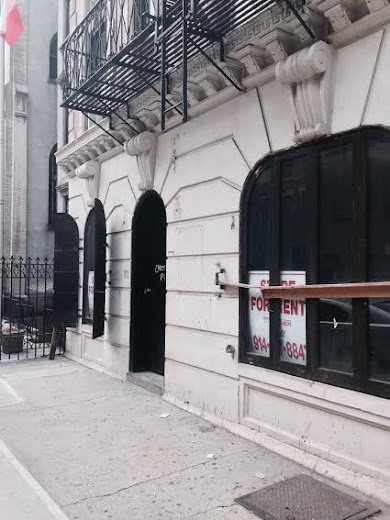 As previously noted, the former Bourgeois Pig space at 111 E. Seventh St. has been on the rental market. According to a listing, the storefront between Avenue A and First Avenue had been asking $10,500.

Perhaps a prospective tenant found the price too high? This message appeared on the door the other day... 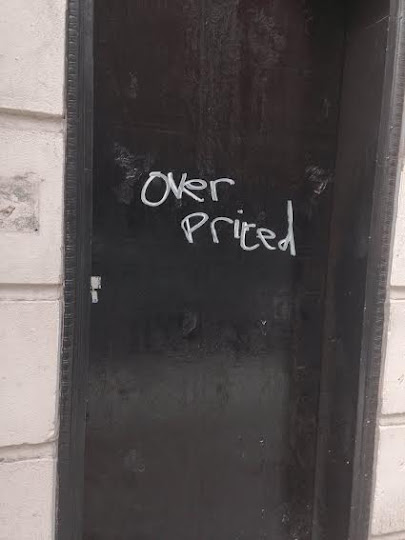 Interestingly enough, the rent was recently reduced ... down to $7,750 monthly... 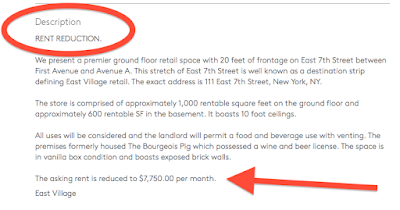 The Bourgeois Pig closed for good in late January, moving to a new location on MacDougal Street. As Eater reported back in November, a rent hike was behind the 10-year-old bar's East Village closure.
Posted by Grieve at 4:15 AM

Greedy and disgusting. There is no reason that restaurant should have had to move.
I never went there, but the idea of them having to move their longtime home to the West Village is ridiculous. And now the landlord is maybe seeing that. That's a big reduction. Too many empty storefronts. Unsustainable.

This is a good start. Now I hope the entire retail rental market in NYC collapses to the point that real businesses can move in.

It would be nice if more of these "taggers" had a perspective, and used their "artistry" for something other than purely self-referential, self-aggrandizing gibberish. Because it is a fairly good medium for social commentary.

Anonymous 10:39, They weren't there long enough for it to be called their "longtime home".

With all of the spaces that have been vacant, I'd think that this would be the start of a trend.

The corporation gets to take the asing price off their taxes as loss, so don't expect the big corp. landlords to budge