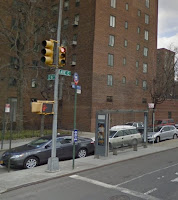 Image via Google Street View
Posted by Grieve at 12:30 PM

Anyone notice that after the recent construction the signal at Bowery and E 4th Street is back to being dangerously short?

Now if they can just put the M9 back on Avenue B where it belongs.

Just for nostalgia? C is much wider, makes sense there.

I second Scuba Diva. Ridiculous that they take our bus away but would consider giving Babu Ji 78,000 chairs and tables for that decidedly non-regulation width sidewalk, which is already incredibly narrow.

The M9 was a Red and Tan bus back in the 60s. It has always run on Avenue B—through Chinatown, and up to Union Square before turning around and coming back.

When the M9 was given most of the M21's route, that didn't make sense. The remaining M21 route is a mere stub of itself.

The M9 also used to be a 24-hour bus. However, it's only because it had become one that terminates service around 10:30 PM that its service wasn't also cut when sweeping cuts were made to the system a few years ago.

Call it nostalgia, but it makes more sense for the M9 to go from Chinatown to Union Square, as it used to even when owned by a privately-owned system.

So is it about being in B vs C or about going to union square? My point was B is too narrow and you've made it about the ultimate destination.

Also, thanks for the history lesson that reaffirms your desire to return to the fictitious "good old days" for no reason other than "it has always been this way."