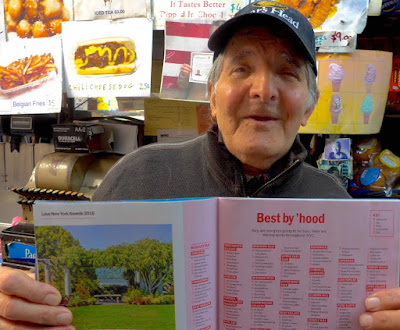 Ray was pleased to learn that Ray's Candy Store at 113 Avenue A was named "Best Restaurant" in the East Village by readers of Time Out. (Officially the Time Out Love New York Awards.) Fried Oreos for everyone! For dinner!

The other reader awards in this neighborhood were ... Bar: Alphabet City Beer Co. on Avenue C ... Cafe/Coffee Shop: Coffee Project New York on Fifth Street between Second Avenue and Cooper Square (they were picked the best in the city) ... Shops: East Village Cheese on Seventh Street between First Avenue and Second Avenue ... and Local Culture: UCBEast on Avenue A and Third Street (the runner-ups in this category were City Cinemas Village East and Anthology Film Archives in case you were wondering ... like I was)... 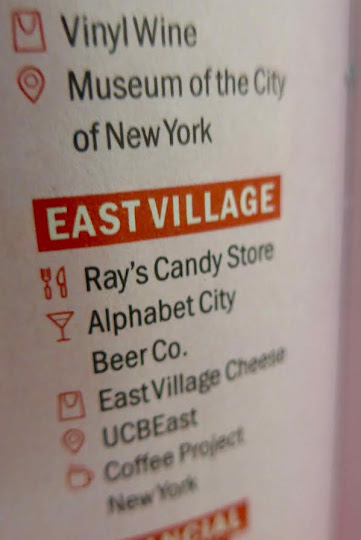 Thanks to EVG regular Peter Brownscombe for the photos...
Posted by Grieve at 4:00 AM

East Village Cheese?!? It won an award for what?!? East Village Cheese has not sold decent cheese or had knowledgable, courteous service since the original owners left years ago and some of the employees took over the shop in it's original space. Currently you could purchase cheese at your local bodega that would match the quality being peddled at East Village Cheese. This confirms my query of the last few years... "Who actually reads Time Out anymore?"

I love Ray's but this is just plain dumb. Ray's Candy Store is not a restaurant, it's a candy store.

Time Out is a total waste. It's a pay for review rag.

Seriously? They pit Anthology Film Archives, one of the greatest (relatively) unsung treasures in the city, against a stand-up comedy club? Nothing wrong with comedy, but why doesn't each group have its own category? Lumping everything even vaguely artistic under "culture" just seems like a lot of very worthy organizations are going to get seriously short-changed. Like Anthology just did.

And I agree with Ronnie - EVC used to be great, now they are just a sad simulacrum of their glory days. Maybe that's why Time Out is now given away free every Wednesday in front of major subway stops. I still don't take it.

I love it! I can't wait to see the Facebook Foodie crowd lining up for dinner. Ray's might not have any Michelin stars, but they sure have plenty of sprinkles.

good for ray but the only people reading time out these days are 22 year olds who just moved here from flyover country.

Ray doesn't sell candy, true. But his egg creams , lime Ricky's & fries & beignets can't be beat. And what a sweet guy he is. He deserves the spotlight. He's a good egg.

Go Ray! He is so happy about this it doesnt matter what it means really. 30 strippers for his bday this year oh yeah!

I guess someone will be dragging me to Ray's in my pajamas at 3AM to celebrate this great news with an egg cream.....:)

Ray's is fine, for what it is, but it's not a restaurant.

The vote for Ray's is a sentimental vote by the few people still in Alphabet City that remain from a more interesting time in the neighborhood, IMO. It's refreshing that he is still around, and this was really a referendum on that fact.

It's true. But it doesn't matter.

You can't trust the free magazines when they pick their "best of"s. The people who read them don't have any money anyway.

Live Nation NYC, Bowery Presents, and I believe AEG Live place full page or almost full page ads in the free Village Voice. Concerts at those venues typically start at $20 (save shows at The Mercury Lounge which start at $10-12.) Therefore, they advertise to people with money and you are...drumroll please...WRONG!

RAY'S IS THE GREATEST! PUT YOUR PAJAMAS ON, 11:11, I'M FIRING UP THE EAGLE! seriously, i love ray and ray's and am thrilled to see him honored in any wonderful way! hooray for ray!