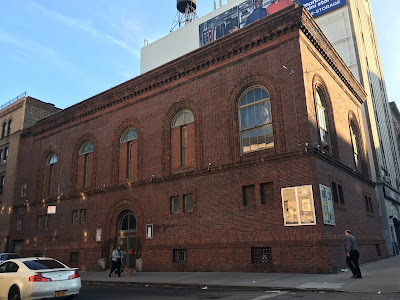 The the Anthology Film Archives takes another step today toward realizing their building "completion project" on Second Avenue and Second Street.

As previously reported, there are plans to add an addition to the landmarked building that will include a library and cafe, two amenities planned for the space ever since co-founder Jonas Mekas bought the building in a city auction in 1979.

These plans go before the the Landmarks Preservation Commission today.

And New York Yimby reports that there have are some changes to the revision and expansion:

The submission to the LPC represents a major change from the previous iteration of the plans, which was substantially glassier. The extension of the facade will consist of a coated copper base, and accents clad in corten steel will line the windows of the library, which have been downscaled substantially. Above that, the addition will feature ‘Anthology Film Archives’ in metal-mesh lettering, covering the penthouse level of the project.

Anthology Film Archives’ expansion will measure a relatively small 14’4″, and even with the extension, the structure will be shorter than its neighboring buildings.

Here is the new rendering from Bone/Levine Architects ... 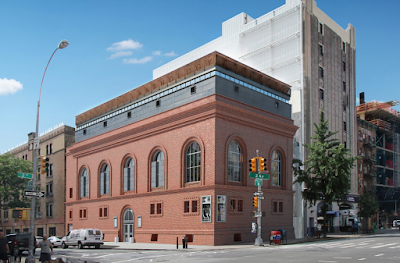 ...and the previously revealed rendering... 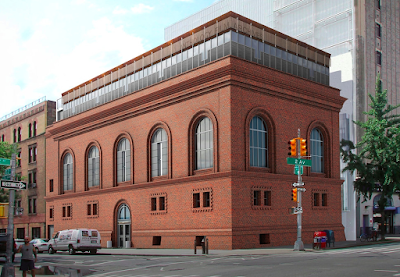 If all goes well, then the expansion would be complete by 2020, per NY Yimby.

Previously on EV Grieve:
Checking in on the 'completion project' at the Anthology Film Archives
Posted by Grieve at 4:30 AM

I remember them planning this back over 20 yeara ago. So many of us young NYC librarians were hoping it might happen.

I prefer the version with the larger windows, unfortunately the other makes the building look like a fortress.

We all understand the need for some chi-chi internet cafe in a building that is part of the entertainment business.....really? No.
What a shame. Disfigure a beautiful building to make some money? What else is new?
The architect would probably raise both eyebrows.

Interesting that a cafe was planned for this space going back to 1979. There was next to nothing in this neighborhood back then and it would have been a unique offering. Even now, the convenience of having available food and drink without leaving the building is great for researchers and if it helps to support the finances of the library, all the better.

The new rendering looks better than the old.

WTF are you talking about 9:59am? Nothing in the article said anything about an internet cafe - learn to read and stop bashing AFA.

It's a bit too horizontal and flat. But what the hell. And the cafe is a good idea. 10:53, you're right. It's convenience and money-making. APPROVE IT!

This was part of the original plan that until now, hadn't materialized. There was always supposed to be a library and Cafe. I have nothing against the Anthology making some additional cash.

I prefer the "glassier" version. The new one looks like cinderblocks.

Hopefully they'll make it more wheelchair accessible. An elevator would help, as well as a ramp in front.

There will be an elevator in the renovated space.

There held an art fundraiser in March with people like John Waters and Jim Jarmusch to help raise the funds for the expansion.

I'm looking forward to seeing the expanded space in a few years.

While I wish the top level could look like more of the old building somehow -- I think I recall somewhere someone showed the original original plans for the building? (maybe I'm dreaming). Like, continuation of brick, with mini arch windows on top that just looks like an extension of the original. I don't know why the current architects of today's time have to go with this metal / glass / copper idea. Maybe the architects are reading these comments.

Definitely all in support of AFA finally being able to raise the funds to do this -- will be extremely exciting for film scholars and the public to review materials. And while it's true there are lots of cafes here now (obvs not back then but it seems from what ppl are saying none of this was done yet due to funding) -- hopefully this cafe will be affordable and a boon to those who visit the cinema and those taking a break from studying -- if it helps to build an income stream for AFA and maybe a more meaningful choice for a coffee when you gotta have it -- to keep this place going -- is a great idea. Definitely hard times for nonprofits right now.

The revision looks pretty good and pretty respectful to me. If the proposed café helps pay the bills, all the better.

Yes, it would have been nice if the new addition could look more like the original building, but I think architects are using these newer materials because of costs. That said, I like the newest revision with smaller windows, etc. as being closer to the overall look of the building.