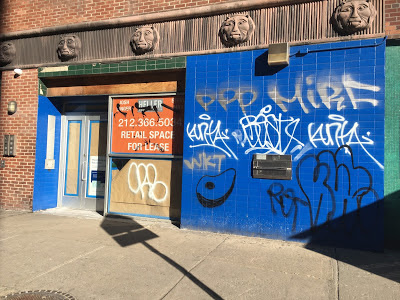 [File photo of the former Citi branch on Avenue A]

Last week we noted that the Santander branch at Avenue A and Fourth Street is closing on April 27. At that time, Avenue A will be bank-branch free.

Apparently the days where you could count on a bank branch opening in every recently vacated retail space are coming to an end. (How far we've come from 2014!)

The Wall Street Journal (subscription required) today looks at the trend of banks cutting back as more customers move online.

The number of branches in the U.S. shrank by more than 1,700 in the 12 months ended in June 2017, the biggest decline on record, according to a Wall Street Journal analysis of federal data.

Branch numbers fell again in the second half of 2017, according to related data submitted to bank regulators and reviewed by the Journal. That would add to the thousands of locations closed following the financial crisis, and is the longest stretch of closures since the Great Depression.

Many of the closings were in big cities and surrounding suburbs, where branches were consolidated largely because of falling foot traffic.

Banks say they carefully consider which branches to close, examining deposit levels at each branch and commute time to the nearest location. “We continue to evolve and optimize our branch network to ensure that we’re operating as efficiently and effectively as possible,” a Capital One spokeswoman said.

For decades, banks needed to add new locations to grow, pushing the number of U.S. branches to a peak in 2009. But in the aftermath of the financial crisis, some started closing branches to save money — and then kept closing them to contend with low interest rates and higher regulatory costs.

Along the way, lenders realized they could maintain their deposit levels with fewer locations in a digital world where customers often prefer banks’ mobile apps and ATMs.

At this point we may need to retire the "bank branches everywhere" tag.

Chase space on 2nd Avenue and St. Mark's Place is for rent

The East Village is down 2 Chase branches
Posted by Grieve at 2:30 PM

The only bank expanding is TD. Everybody else is running for the hills. I guess that's where the profits are.

Good riddance, but the damage has already been done. All those bank branches pushed out long time businesses and denied new ones many prime corner locations. They helped jack up commercial rents, now they can move on to the next scam.

I think they are all moving to Washington DC.

Lack of foot traffic? Another form of redlining, if you ask me.

Relying on apps to do banking is inherently irresponsible. Sure it's convenient being the only one on line, but it's rather unsettling.

If you want to deposit $60 in cash, just give it to me and I'll take care of it. I'll even give you a receipt if you want.

And I will be courteous and pleasant.

That's a great idea Dr.Gecko. Let's consolidate and then incorporate, to divest of any legal obligations. We'll provide a door-to-door service, depositing people's cash who now are forced to walk out of the neighborhood due to these bank closings.

We'll have an app as well, which will make it even more popular among the millennials.

The plan is to get rid of cash and force you into their locked down totalitarian economic system.